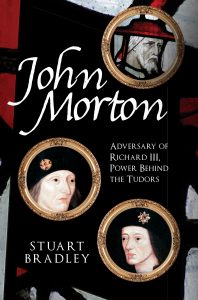 The Archbishop of Canterbury is the highest position in the English church, the ‘First Bishop’ of England. Throughout the Middle Ages there are iconic names associated with the position; Augustine, Hurbert Walter, Simon Sudbury, Stephen Langdon, Thomas Becket and John Morton.

You don’t recall John Morton? He presided over the church during one of England’s bloodiest civil wars, the Wars Of the Roses. Morton was a staunch foe of Richard III and was determined to see his reign end. Morton was made Lord Chancellor during Henry VII reign and helped establish the Tudor dynasty. Yet Morton is rarely brought up when the Wars of the Roses is discussed.

https://www.amberley-books.com for a vast selection of medieval history.

Support Stuart and Amberley Publishing as they continue to publish great history about the Middle Ages!

Medieval Archives gives John Morton Adversary of Richard III, Power Behind the Tudors 4 out of 5 stars.

John Morton (c. 1420 – 1500) was one of the most important men in the land from the Wars of the Roses to the start of the Tudor dynasty. Yet he has been largely ignored in recent times.

He was a man of great character and influence over politics and the Church. He lived into his eighties, having served three kings as a councillor, Master of the Rolls, Lord Chancellor, bishop, Archbishop of Canterbury and Cardinal. His skill was a key factor in the establishment of the early Tudor state. He had escaped from the Tower of London, lived in exile twice, and was a major adversary of
Richard III. He funded the building of Hatfield Palace, the first drainage of the fens, and the central tower of Canterbury Cathedral. The Morton Psalter contained the first printed music in England.

As SB Chrimes observed, ‘there can be little doubt that Morton was the key figure in Henry VII’s government, nothing approaching an adequate study of his life and role has yet been published.’ In fact no detailed biography on Morton has been produced since Victorian times.

This book follows John Morton’s career through the reigns of Henry VI and Edward IV, and his central role in opposition to Richard III, before his fifteen years as Lord Chancellor to Henry VII, which were crucial to the establishment of the Tudor dynasty.

Dr Stuart Bradley has been a head teacher for over twenty years and is currently Head of Primary at
The Sultan’s School, Muscat in the Sultanate of Oman.

REVIEW: The Normans: A History of Conquest by Trevor Rowley