Mer de Mort: A Mortimer concept album for the 10th anniversary of the Mortimer History Society 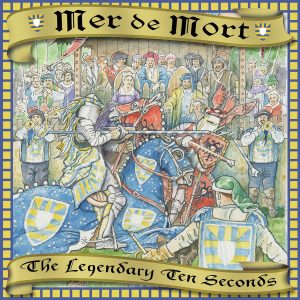 Their new album is a tribute to the Mortimer History Society.

If you like their music support The Legendary Ten Seconds by purchasing an album. You can find all their music at http://thelegendary10seconds.co.uk/the-albums/

The origins of the powerful Mortimer family of Wigmore were in Normandy. They took their name from the castle of Mortemer-sur-eaulne…a castle that they held for only a few years.

Coming to England in the aftermath of the Norman Conquest of 1066, Ralph Mortimer was rewarded with manors across the whole of England. The most important was the castle at Wigmore in north Herefordshire, on the borders with Wales, which became their principal seat and remained the core of their dominions for 350 years.

In the centuries after the Norman Conquest, the Mortimer family grew first to dominate the Welsh Marches, then the whole country. Indeed, one historian has noted that ‘for the Mortimers to have survived for over three centuries as Marcher Lords was a political and biological feat.’ Increasingly, they became one of the wealthiest and most powerful families in the country, and were key players in national events:

Hugh Mortimer led the royal forces in the Welsh Marches during the Anarchy and civil wars of the 12th century; living to a very old age, he founded Wigmore Abbey;

During the Barons’ War of the mid-13th century, Roger Mortimer, lord of Wigmore, helped the heir to the throne to escape captivity; he killed Simon de Montfort, the leader of the Barons’ cause, at the battle of Evesham, sending to his wife at Wigmore a trophy of Simon’s severed head;

His grandson, another Roger Mortimer, ruled the country for nearly four years, having forced the King to abdicate. He became an earl, with the title Earl of March, but ended up on the scaffold;

In turn his grandson, yet another Roger Mortimer, re-established the fortunes of the family so successfully that he was able to marry his son into the royal family, with the following generations entering the line of succession to the throne.

In the early years of the Lancastrian monarchy, there were repeated rebellions in the name of Mortimer claiming that they were the rightful kings.

Finally, in 1425, with the death of the childless Edmund Mortimer, 5th Earl of March, the vast Mortimer inheritance of estates and titles across England, Wales and Ireland, together with a claim to the throne passed to Edmund’s nephew, Richard, Duke of York.

Thirty-five years later, the Mortimer inheritance was the key that unlocked the crown for the house of York. From their Mortimer descent, Richard Duke of York and his eldest son Edward, claimed that they had a better right to the throne than the Lancastrian kings. Equally importantly, it was also the Mortimer land and wealth that provided the resources to win the throne.

Although the death of another Mortimer grandson, King Richard III, at the Battle of Bosworth in 1485 ended the line of the Yorkist kings, it was not the end of the Mortimer/York lineage. The new Tudor king, Henry VII, married king Edward IV’s eldest daughter, who, of course, was a great-granddaughter of the Mortimers. Thus, all subsequent monarchs are descended from the Mortimers.

The songs on this album highlight some of the dramatic events in the lives of the Mortimers, lords of Wigmore, earls of March.

All songs arranged and recorded at Rock Lee, Torquay and Otherworld studios in Marldon by

Narratives written by Philip Hume and read by John Challis, recorded by Lord Zarquon at the Palace Theatre, Paignton on Saturday 25th October 2018.