Ireland: The Struggle for Power by Jeffrey James 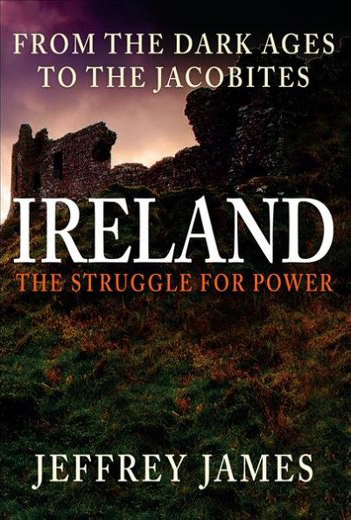 Ireland has a rich history and Jeffrey James explores over 600 years of Irish history in his new book Ireland The Struggle for Power. We caught up with Jeffrey for an interview about his writing life and his new book.

Grab your copy of Ireland: The Struggle for Power from the Amberley Publishing website: https://www.amberley-books.com/ireland-the-struggle-for-power.html

Ireland: The Struggle For Power From The Dark Ages To The Jacobites

Ireland’s history has been shaped by the many invaders who have set foot on the country’s shores. For centuries conflict raged amongst the native Irish, Vikings, Anglo-Normans, English and Scots, then the Catholics and Protestants. This real-life game of thrones has moulded the social, political and military history of the nation, so often its problems caused by its proximity to more powerful neighbours.

Being a largely ‘empty’ land, Ireland was an attractive proposition for landless knights, and the Norman Conquest of Ireland in 1171 saw a group of carpetbagging Anglo-Normans begin to carve up the country. Without the incursions of the Vikings and Anglo-Normans, Ireland would not be the country it is today. Beginning with Ireland’s earliest history, Ireland spans the centuries, covering the period of Scottish raiding during the War of Scottish Independence and the Elizabethan and Stuart plantations. The seventeenth century witnessed rebellions against English rule and Oliver Cromwell’s storming of Drogheda and Wexford. Upon the installation of William III on the English throne, Ireland became a battleground between competing European powers, the struggle culminating in decisive defeats for James II at the battles of the Boyne and Aughrim, the bitter legacy of which has blighted modern times.

A fascinating saga of invasion, resistance and colonisation, discover the history behind this real-life game of thrones.

What is your background? When did you decide to start writing?
I think I have always wanted to be a writer but did not really get the time to devote myself to doing anything worthwhile until, at the age of 55, I retired from my job of thirty years as a financial project manager with IBM (UK) Ltd. Then I began working on articles for magazines like Military Illustrated and Military History Monthly – the number published now stretch into double figures. It was my editor at Military Illustrated, Tim Newark, who first suggested I attempt writing a book; I chose a topic I had already researched for a number of articles submitted to Tim, the conquest of England by the Danes in 1016; the book was titled An Onslaught of Spears, published by The History Press in 2013 (I nearly wrote 1013 there, so used am I now to thinking within a medieval mind-set.)

Tell us about your writing process.
I write direct into a word document, researching as I go along. I tend to get several chapters drafted before I commit myself contractually to completing a full book. For articles I like to get a newish angle on a subject: for instance, was Prince Rupert a war criminal? rather than was he a great general? (neither are true by the way). This is harder for books,especially like the Ireland book which spans over a thousand years of history; for this book I tried to work to a theme of ‘backs against the wall in the face of overwhelming odds’, as per the lead quote in the book, ‘Gentleman, you may soon have the alternative to live as slaves or die as free men’ (Daniel O’Connell, 1843). I try to use primary sources and trusted secondary sources where possible, and I anchor my histories chronologically by making use of the Oxford Dictionary of National Biography. I write from quite early in the morning to mid morning, then again in the late afternoon. I back up my word docs. onto a local disc last thing at night.

Where is your favorite place to write?
At home, the spare bedroom, with the window open so I can hear the birds.

When you sit down to relax with a book, who are your favorite authors?
In the past I was a voracious reader of all sorts of books: novels, histories, thrillers, sci-fi. But now I tend to read books around the subject matter of my work, mainly biographies. For more relaxed reading I enjoyed the Larrson ‘Millennium’ series (‘the girl with the dragon tattoo’ etc) ….’; Michael Connelly thrillers; Patrick O’Brien’s Aubrey and Maturin novels about the Royal Navy during the Napoleonic Wars (these rival Forester’s Hornblower series, which I read as a boy) and Hilary Mantel’s Wolf Hall & Bring Up the Bodies. Other modern novelists I like include Philip Roth, William Boyd and Larry McMurtry.

How did you come up with the idea for Ireland, The Struggle for Power? What sparked your interest in Ireland?
My mother’s maiden name was Kelly, my maternal Grandmother’s maiden name was O’Neill. My wife, Una, is Irish from County Kildare. I love Ireland as a place to visit; something my wife and I have done regularly for the past thirty years or so. I also like visiting battlefields, castles and ancient sites: raths, stone circles. Ireland is full of them, so I tried to fill my book with them too.

When did your interest in the Middle Ages begin?
Quite late in life to be fair. I was more interested in seventeenth-century Britain until I started to research the Viking raids on Britain and Ireland for the Onslaught of Spears book.

What surprises surfaced during your research?
This is a difficult question; the process of researching throws up new facts and ways of looking at things all the time. I knew the history of Ireland to be a sorry tale of ill treatment at the hands of the colonising English, but did not realise the full extent to which ethnic/religious prejudice directed the actions of otherwise reasonable people; examples of this are the later Tudors, Queen Elizabeth I, Raleigh, Drake etc. Oliver Cromwell is perhaps the most hated man in Ireland; and yet he was merely implementing policy which had already gained widespread support in England; not a surprise perhaps, but nonetheless upsetting. Most Englishmen of the period appear to have accepted that the retribution meted out on the Irish by Cromwell and his successors was long-overdue – an exception was Prince Rupert of the Rhine, a young German who claimed, rightly, that the English nation was ‘in danger of destroying itself and degenerating into such an animosity and cruelty, that elements of charity, compassion, and brotherly affection shall be extinguished’. This is kind of how I see Britain today with respect to Brexit/foreign aid cuts etc.

Who was your favorite figure you researched?
The legendary Finn McCool, who pops up throughout the book: a deliberate ploy on my part. Of the real figures I researched, my favourite must be Domnall O’Neill who led the fight-back against English rule in the early fourteenth-century by writing his famous remonstrance to the Pope, where he railed at the invading English’s ‘sharp toothed and viperous calumny’. Domnall had a way with words, he urged the Pope ‘to smite and correct [the invaders] like a naked blade’, which of course never happened. Of the English, I got a kick out of writing about Richard II, who had a liking for the Irish; indeed, whose end was in part facilitated by his putting affairs in Ireland before those closer to home in England.

Your book covers over 600 years of history, going from the medieval to the modern. Why did you want to give readers such a wide-ranging view of the topic?
I wanted to trace back as far as I could go the impact of foreigners on Irish history. Much as been written of late about the Easter Rising of 1916, but very little is written about what led to the dramatic in Dublin that year. I considered a book which would extend to 1916, but, in discussion with my editor at Amberley, Annie Campwell, decided to trim the scope back to the Jacobites. Annie suggested another book – a sort of volume II on Ireland, but I am at present researching the careers of the sons of William the Conqueror, King William Rufus, Robert, duke of Normandy and Henry I for a book about the Heirs to the Norman Conquest.

You can find Ireland: The Struggle for Power and all of Jeffrey’s books on the Amberley Publishing website.

Jeffrey James has published numerous articles on military history and is the author of An Onslaught of Spears, a history of Viking attacks on England leading to Cnut’s conquest in 1016, and Swordsmen of the King, covering the exploits of Charles I’s German nephews during the English Civil War. He lives in Southsea, England.