Reconstructed face of Robert the Bruce is unveiled 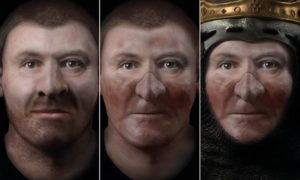 Historians have unveiled a digitally-reconstructed image of the face of Robert the Bruce almost 700 years after his death.

The image has been produced using casts from what is believed to be the skull of the famous Scottish king.

It is the culmination of a two-year research project by researchers at universities in Glasgow and Liverpool.

Until now, portraits and statues of the victor of Bannockburn have relied on artists’ imaginations.

With no contemporary artworks to tell us what King Robert actually looked like, historians at the University of Glasgow teamed up with Liverpool John Moores University (LJMU) to provide an accurate representation.

Its Face Lab specialises in recreating likenesses from legal and archaeological evidence – most famously, the face of the English king, Richard the Third.

Robert the Bruce is best remembered for his victory over the English army at the Battle of Bannockburn in 1314.

Dr Macgregor said: “There is a real sense of character in this face.

“Bruce must have been a remarkable man. All of his achievements suggest this to us.

“There must have been tremendous strength of purpose in this individual as well as many other human virtues – flaws as well.”

Dr Macgregor said historians should remain cautious about the identity of the skull. More than one Scottish monarch was buried at Dunfermline.

But Prof David Gaimster, the director of the Hunterian, is confident the face is that of the famous king.

“The combination of these magnificent gilded marble fragments and the skeleton itself, the lead wrapping, the depth of the tomb, the location,” he said

“All of this information begins to build a high level of probability that this was in fact the tomb of Robert the Bruce.”

The King’s Head – the documentary following the reconstruction from start to finish – will be screened on BBC ALBA on 15 December 15 at 20:30