A Year in the Life of Medieval England by Toni Mount 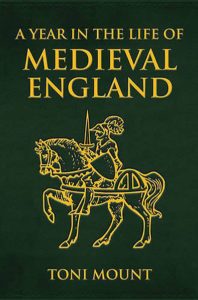 Have you ever wondered what life was like in the Middle Ages? Not just the ‘celebrity’ news of Kings, Knights and Nobles, but the life of the villager or local merchant. Wonder no more! Toni Mount offers a look at the everyday Medieval life in her new book A Year in the Life of Medieval England.

A Year in the Life of Medieval England begins on January 1st and progresses through the year without missing a day. Each day describes an event or two that occurred. In order to accomplish this Mount doesn’t restrict herself to a single year. Instead she uses the entire Middle Ages, from 1066 to 1500. Mount uses contemporary and secondary sources to provide a glimpse into the day to day life of Medieval England.

The book covers the major events in the Middle Ages; the death of Kings and important nobles, famous battles and the birth of Princes. But what makes this book stand out from others is the inclusion of everyday events of ‘normal’ people. There’s a Last Will and Testament from a minor Knight in Kent, holiday traditions, school grammar, horticulture, laws; the list goes on and on.

It’s easy to get engrossed in A Year in the Life of Medieval England, the daily entries are short enough to read in 5-10 minute sessions. But once I got started I read a month or two at time. Mount mixes the right amount of well known history with unknown history to make an enticing book.

A Year in the Life of Medieval England is an excellent look into the lives of both Nobles and commoners alike. The entries are filled with mixed emotions as well. One day you read about the neglected Road Tax and the next you are reading about the death of an unborn child. Another great feature of this book is you don’t have to read it from front to back. You can pick it up and start reading anywhere. Start in June, jump to March, then head over to November!

I recommend this book to anyone looking to get a better view of the Medieval Era. It offers a nice balance of history from across the social classes and spans the entire Middle Ages. A Year in the Life of Medieval England will make a great addition to any library!

You can find Toni Mount on Twitter @tonihistorian, or visit her facebook page. Visit her website at www.tonimount.co.uk for more information on her books, talks and classes.

You can buy A Year in the Life of Medieval England on the Amberley website or check your favorite bookseller.

Medieval Archives gives A Year in the Life of Medieval England 4 out of 5 stars.

Disclaimer: Medieval Archives received a complimentary copy of “A Year in the Life of Medieval England ” for review purposes

A Year in the Life of Medieval England

The medieval era is often associated with dynastic struggles, gruesome wars and the formidable influence of the Church. But what about the everyday experience of the royal subjects and common people? Here, alongside the coronations, diplomatic dealings and key battles, can be found the fabric of medieval life as it was really lived, in its folk songs, recipes and local gossip. With a diverse range of entries – one for each day of the year – historian Toni Mount provides an almanac for lovers of all things medieval. A detailed picture is gathered from original sources such as chronicles, manor court rolls, coroners’ rolls and the records of city councils. We learn not only of the royals and nobles of official history but also the quarrels of a miscellany of characters, including William and Christopher of York, Nalle Kittewritte who stole her neighbours’ washing, and Margery from Hereford who was murdered by an Oxford student. The world in which they laboured, loved and lived is vividly reimagined, one day at a time.

Philippa Of Hainault: Mother Of The English Nation by Kathryn Warner