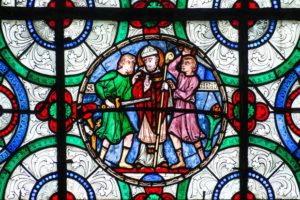 The gleam of new stone in sunlight reveals that work is complete on the conservation challenge that Canterbury Cathedral would never have wanted to tackle – the reconstruction of a towering medieval window, built to hold some of the most precious stained glass in the world.

“This is the stone’s time to shine, when you can really appreciate the craftsmanship of what has been achieved,” said Heather Newton, the cathedral’s head of conservation. Standing on scaffolding 16 metres up, at the top of the great south window, she was among a jigsawed mixture of 15th-, 18th-, and bright, newly cut 21st-century stone. “Once the glass goes back in, that is what you see, the stone becomes almost invisible. But for now, it is so beautiful.”

The glowing stained glass, including the towering figures of the ancestors of Christ, the finest and oldest set of their kind in Europe, is gradually being taken from its purpose-built air-conditioned storage in Leonie Seliger’s glass studio, housed in a charmingly ramshackle shed in the north side of the church.

Surprisingly all the glass panels that will fill the gigantic window, including many that are 800 years old, fit into one storage space not much bigger than an office stationery cupboard. As they are reinstalled they will fill a window 16 metres tall and seven wide with jewelled colour, but for now light pours through the panes of plain leaded glass, which will protect the medieval masterpieces from wind, rain, and 21st-century pollution.
Advertisement

Work on the acres of roof, carvings, towers, monuments, and decaying medieval drains older than the present building, is unending. Newton and her colleague Jo Deeming, whose title “surveyor of the fabric” is as as old as the cathedral, had complex and expensive jobs plotted out for years to come – and then just before Christmas 2009, a large sharp spear-shaped chunk of stone fell from high in the south window.

An urgent inspection followed, and the results were worse than they could have imagined: the stone was from one of the mullions, the vertical sections that help support the weight of the window and the wall above it, and it was disintegrating. The devastating conclusion was that the window was in danger of imminent collapse, and within weeks all the ancient glass had been removed, and the window boarded up.