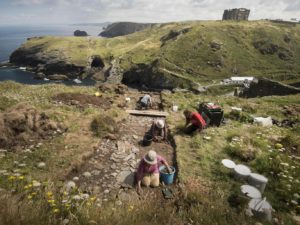 Archaeologists are investigating a mysterious coastal settlement that they think may have been home to post-Roman British royalty, at Tintagel in Cornwall, England, the reputed birthplace of the legendary King Arthur.

Hundreds of pieces of “high-status” pottery and glass were found at the site, located on England’s southwest coast.

The researchers said the headland was likely occupied from the 5th to the 7th centuries, possibly by the kings of Dumnonia — a native British kingdom in the west of England during the Early Medieval period, after the end of Roman rule early in the 5th century.

“It’s the period that we used to call the Dark Ages, but we now avoid that term,” project director Win Scutt told Live Science. “But if we did call it the Dark Ages, it would be the darkest part.”

Scutt, the regional curator for English Heritage, the government trust directing the excavations, said more than 200 pieces of imported Mediterranean pottery and fine glass had been found during the latest excavations at the site, which spanned more than three weeks in July and August. The recent discoveries suggest the site was once a high-status settlement that was linked through trade to the eastern Mediterranean region — at that time, the seat of the Byzantine or Eastern Roman Empire.

In English legends, Tintagel is the birthplace of Arthur, the legendary British king who is said to have fought the invading Saxons sometime in the centuries after the end of Roman rule.

According to the story recorded by the 12th-century writer Geoffrey of Monmouth, Arthur’s father, Uther Pendragon, seduced Arthur’s mother, Igraine, while magically disguised as her husband, the Duke of Tintagel. A later tradition arose that the future King Arthur also lived at Tintagel as a child.

Geoffrey of Monmouth also mentioned Tintagel as the later home of Arthur’s cousin through Igraine’s family, the wicked King Mark of Cornwall. King Mark was the husband of the beautiful Irish princess Iseult, and the vengeful uncle of her lover, Tristan, a Cornish knight of King Arthur’s Round Table.