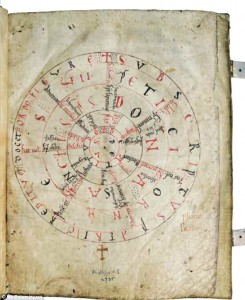 The Liesborn Gospel, containing just the Gospels of Matthew, Mark, Luke, and John, has a cover made of carved oak with copper clasps and is thought to have been ordered by an abbess – or female superior – called Berthildis for highborn ladies who entered her convent in Liesborn in Germany.

The book is for sale by Manhattan-based medieval manuscripts dealer Les Enluminures Gallery for $6.5 million (£4.3 million).

Written in Latin and arranged in concentric circles, the prayer wheel’s outermost ring contains instructions, which when translated from medieval Latin read: ‘The order of the diagram written here teaches the return home.’

The next circle, entitled ‘seven petitions’, contains seven quotations from the Lord’s Prayer along its spokes, including ‘daily bread’ and ‘kingdom come’.

The third circle from the outside reads ‘Gifts of the Holy Spirit,’ and includes the words ‘wisdom’ and ‘counsel,’ written in a mixture of black and red ink.

Written in red, these gifts are mixed with seven events in the life of Jesus, such as his baptism and ‘passion day of judgement,’ which are shown in black.

Around the centre of the wheel, which reads Deus, or God, are the seven groups of people blessed in Jesus’ Beatitudes, for example, the meek and poor of spirit, with their rewards, such as ‘inherit the Earth’ and ‘Kingdom of heaven’ listed opposite.

The diagram is an early example of its kind, which is known in five other manuscripts, the earliest of which is an 11th century work from south western Germany.

Read the full story on the Daily Mail