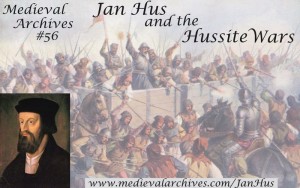 Jan Hus was a Czech or more accurately for his time, a Bohemian priest, philosopher and religious reformer who shock up the catholic church in the 15th century. We’ll look at his life, his ideas about religion and the catholic church and the wars fought in his name.

I have shelves and shelves of medieval history books and almost all of them handle the history of Jan Hus and the Hussite Wars the same way…briefly. Most give the subject one or two paragraphs and nothing more.

On today’s episode we are going to look at Jan Hus and the Hussite Wars in depth. We’ll look at the history of Hus and the Hussite Wars. A series of Wars, Crusades really, fought against his followers. We’ll also look at the Military mastermind Jan Zizka. Zizka holds a very significant distinction with only 7 other military leaders in all of history! Tune in to find out.

Please send any comments or suggestions to podcast@medievalarchives.com

In this episode we discuss:

Get your free audio book from Audible.com at: https://www.medievalarchives.com/AudioBook

The music was provided by Tim Rayburn. It is available at Magnatune.com