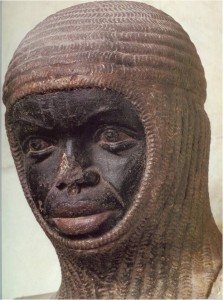 According to the Oxford English Dictionary, the Moors, as early as the Middle Ages and as late as the 17th century, were “commonly supposed to be black or very swarthy, and hence the word is often used for Negro.”

Early in the eighth century, after a grim and extended resistance to the Arab invasions of North Africa, the Moors joined the triumphant surge of Islam. Following this, they crossed over from Morocco over to the Iberian Peninsula where their swift victories and remarkable feats soon became the substance of legends.

In July 710, Tarif, with 400 foot soldiers and 100 horses, all Berbers, successfully carried out a mission in southern Iberia. Tarif, an important port city in southern Spain, is named after him.

It is clear, however, that the conquest of Spain was undertaken upon the initiative of Tarik ibn Ziyad. Tarik was in command of an army of at least 10,000 men.

Few documents portray the ethnicity of the Moors in medieval Europe with more passion, boldness and clarity than Morien. Morien is a metrical romance rendered into English prose from the medieval Dutch version of the Lancelot.

Morien is the adventure of a splendidly heroic Moorish knight (possibly a Christian convert), supposed to have lived during the days of King Arthur and the Knights of the Round Table. Morien is described as follows:

“He was all black, even as I tell ye: his head, his body, and his hands were all black, saving only his teeth. His shield and his armour were even those of a Moor, and black as a raven.”

Initially in the adventure, Morien is simply called “the Moor.” He first challenges, then battles, and finally wins the unqualified respect admiration of Sir Lancelot. In addition, Morien is extremely forthright and articulate. Sir Gawain, whose life was saved on the battlefield by Sir Morien, is stated to have “harkened, and smiled at the black knight’s speech.” It is noted that Morien was as “black as pitch; that was the fashion of his land — Moors are black as burnt brands. But in all that men would praise in a knight was he fair, after his kind. Though he were black, what was he the worse?” And again: “his teeth were white as chalk, otherwise was he altogether black.”