The Vikings Podcast #209: The Choice 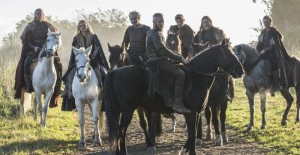 This episode is full of choices. Does Rollo choose Siggy? Does Bjorn Choose Thorunn? Does Ecbert choose to battle the Vikings? Does Ragnar choose to follow Horic? Does King Horic choose to negotiate with King Ecbert? Does Athelstan choose the Vikings or the English? Everyone has a choice to make, will it be the right one? Find out those answers and more on another great episode of Vikings.

On this episode of The Vikings Podcast we’ll review and recap episode 9, The Choice. Then we’ll look at the history presented in the show and see how it compares to actual history.

Ragnar’s Viking warriors march on to King Ecbert’s villa and are met with a surprisingly vicious welcome party along the way. After a bloody battle both sides must come to new terms.

Watch it now in iTunes:


Listen to the episode now

In this episode’s history lesson we discuss:

Click on the images below to get your Vikings gear! (Affiliate Links)

Send in your comments and feedback by calling the listener voicemail line at 720.722.1066 or send an email to feedback@thevikingspodcast.com

Download the MP3 and listen to it on your favorite MP3 player. Subscribe to the feed or in iTunes so you never miss a single episode.

Copyright © 2014 · Dragon Moon Media
All Rights are Reserved. No Infringement is Intended.
The Vikings Podcast is a Medieval Archives & Dragon Moon Media production. Medieval Archives’ use of any and all copyrighted material is only for parody, news analysis, critique, and/or for educational purposes as provided within United States Code (USC) Title 17 aka “Fair Use”.
[simple_series title=”VIKINGS Season 2 Podcasts”]