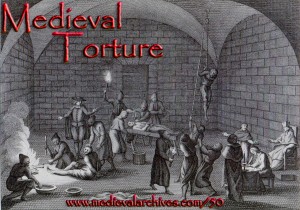 In the Middle Ages torture was used for a variety of reasons, to gain information, to purify heretics and to punish criminals. In this lesson of the Medieval Archives Podcast we are going to explore medieval torture and the devices used by medieval torturers.

Devices of pain, torment and mutilation used by the Church to punish heretics and blasphemers. You’ll even find out which Pope issued a papal bull condoning the use of torture! Join us on the dark side of the Middle Ages as we explore Medieval Torture.

Please send any comments, suggestions or topic ideas to podcast@medievalarchives.com

…inflicted on them unutterable tortures; for never were any martyrs so tortured as they were. Some they hanged up by the feet, and smoked them with foul smoke; and some by the thumbs, or by the head, and hung coats of mail on their feet. They tied knotted strings about their heads, and twisted them till the pain went to the brains.
~Anglo-Saxon Chronicles

Get your free audio book from Audible.com at: https://www.medievalarchives.com/AudioBook

In this episode we discuss Medieval Torture devices like:

The music was provided by Tim Rayburn. It is available at Magnatune.com
Sound clips from Ancient Discoveries, Modern Marvels and Bill and Ted’s Excellent Adventure