The Many Faces of the Middle Ages: Medieval Facial Reconstruction 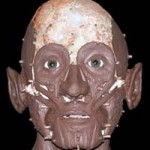 What exactly is facial reconstruction and how is it used? The book definition is: process of recreating the face of an individual (whose identity is often not known) from their skeletal remains through an amalgamation of artistry, forensic science, anthropology, osteology, and anatomy. Ok, so what does that mean! Well in simplest terms scientists use bone structure and tissue depth data to reconstruct a skull. It’s one of those things thats easier to see than explain in text. The video below does a great job of describing and showing how the process works. (At the 3:30 mark it gets into modern forensics, so you can stop it there or not)

There is also a great video by the New York State Museum that details the science behind facial reconstruction. It is over an hour long so be prepared.

(click on any picture to view it in full size)

We talked briefly about King Richard III, his face was reconstructed in early 2013. There is a documentary titled “King in the Car Park” produced by the BBC that shows how the face was reconstructed. Unfortunately it never aired in the US. We have to get by on just pictures of the final product. (You can search YouTube to see bits of the “King in the Car Park” documentary)

The Spitalfield’s woman was discovered in 1999. She was a women in her 20’s buried in an ornate coffin and her head was resting on a bed of bay leaves. The date of her death is around the 4th Century.

Read more about the Spitalfield Woman

The Leasowe Man skull is the oldest skull found in Merseyside. The skull and remains were found under a peat bog by workers in 1864. Sir Edward Cust, the owner of Leasowe Castle donated the skull to the Royal College of Surgeons that same year. Radiocarbon dating places the age of the remains around the 4th century. Today the skull is in the care of the Natural History Museum in London.

Read more about the Leasowe Man

The Mary Rose was one of King Henry VIII’s ships that sunk around 1545. The ship was raised in 1982 and researchers found over 92 complete skeletons in the ship. They determined this man was an archer due to the “repetitive stress injury of the arm consistent with pulling a longbow with a force of up to 90kg.” Researchers believe he was a high ranking officer. He was found with an ivory arm guard and a silver ring. His age at the time was late 20s to early 30s and he stood over 6 feet tall.

A few years ago an excavation at Stirling Castle uncovered 10 skeletons. One of them was a knight, possibly Sir Robert Morley, believed to have died during the Scottish Wars of Independence. His age at the time of death was in his 20’s and he stood 5ft 7in tall, with a very strong physique.

Morley appears to have been an impressive warrior, his skeleton reveals that he lived with an arrowhead lodged in his chest. He also had a severe dent in his forehead from an axe blow, that he survived! Ultimately what killed him was a sword strike that sliced through his nose and jaw. It is believed that he was lying down when he received the fatal blow.

Welshman Owain Glyndwr was the last crowned Prince of Wales. He was proclaimed Prince in September 1400. However young English Prince Henry (Future Henry V) was creat Prince of Wales in 1399. At the time Glyndwr was proclaimed Prince he launched the Welsh Rebellion against King Henry IV. The rebellion was successful at first but the English were to powerful and stopped the rebellion in 1409.

Glyndwr refused numerous pardons from then King Henry V and despite having a large bounty on his head he was never captured by the English. Glyndwr was last seen in 1412, it’s believed he died in 1416.

Simon of Sudbury was the Archbishop of Canterbury from 1375 unitl his death in 1381. Sudbury was a casualty of the Peasants’ Revolt of 1381. He had a pretty grusome death; it took eight blows to behead him on Tower Hill.

You can listen to the Peasants’ Revolt podcast episode to learn more about the Revolt and Sudbury’s death. Bit of an odd looking fellow…

Read more about Simon of Sudbury

Dante Alighieri, the “Father of the Italian language” and writer of the Divine Comedy. To reconstruct his facial features scientists used drawings and measurements from his skull. My favorite quote from the story “He was not a handsome man. That much is true. But he was much less ugly than we believed.” I think that might be a compliment…

I find the whole facial reconstruction process fascinating. Although I wonder if it is overly influenced by portraits that may or may not be accurate.

What are you’re thoughts? Do you like scientists putting a face on the Middle Ages or would you rather they leave it to the imagination? Leave your opinions in the comment section below.