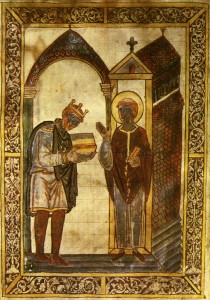 Aethelstan was the first King of Wessex to bring together all the Anglo-Saxon kingdoms in England. He was well educated, very pious and a collector of saints relics and manuscripts. He was also a formidable warrior. We have considerably more information about Aethelstan’s reign than other Anglo-Saxon kings due to the survival of many charters dating from his time as king and there are references to Aethelstan in foreign sources.

Aethelstan was born sometime between 893 and 895 AD. His father was King Edward the Elder, the oldest son of King Alfred the Great. His mother was named Ecgwynn and very little is known about her. There is no record of Edward and Ecgwynn being married and Aethelstan’s legitimacy was questioned during his lifetime. It is possible they were married in secret but she did live at court. She also had a daughter whose name we do not know but who would play a role in Aethelstan’s conquest of the island. Aethelstan may have been his grandfather’s favorite because Alfred gave him a scarlet cloak, a belt set with precious stones and a Saxon sword with a gilded scabbard sometime before he died. At the very least, Alfred was making a gesture marking Aethelstan as throne worthy.

Aethelstan is described as being handsome, of medium height and slim. The chronicler William of Malmesbury recorded he had seen Aethelstan’s remains and describes his hair as flaxen with gold threads. King Alfred died in 899 and Edward the Elder became King of Wessex. Either Ecgwynn died or was put aside so Edward could make a more prestigious marriage. He married a woman named Aelflaed. Aethelstan was sent to be educated at the court of his aunt Aethelflaed and uncle Aethelred in Mercia, possibly to avoid conflicts with his stepmother and her children. It is also possible Aethelstan was being chosen as the heir to the kingdom of Mercia.

Not only was Aethelstan educated in Mercia but he was trained in arms and the study of military tactics and warfare by his aunt and uncle who were both experts. He assisted them in the subjugation of the Danes and the building and defending of burhs throughout Mercia. Aethelred died in 911 and Aethelflaed ruled as virtual queen of Mercia until her death in 918. It is possible Aethelflaed expected her daughter Ӕlfwynn to succeed her. But Edward the Elder took control of Mercia upon his sister’s death and expelled Ӕlfwynn. Aethelstan may have served as an underking for his father between the exile of Ӕlfwynn and Edward’s death in 924.

When King Edward died on July 17, 924, it is unclear what exactly happened next. Aethelstan was elected king of the Mercians and the council of Wessex elected Aethelstan’s half-brother Aelfweard king. But Aelfweard died within a month of his father and Aethelstan may have had to fight a civil war to gain the Wessex throne. Aethelstan would have been the preferred candidate to succeed his father as he was in the prime of this life and well-versed in warfare. His surviving stepbrothers were very young. What we do know is Aethelstan finally prevailed in claiming the thrones of Mercia and Wessex and his coronation took place on September 4, 925 at Kingston-on-Thames.

Aethelstan had a very busy first year as king. In the new year of 926, he travelled north to Tamworth and met with the Norse king of York, Sihtric. Sihtric swore fealty to Aethelstan and was married to Aethelstan’s full sister whose name we do not know. Sihtric died shortly after the marriage. Sihtric’s brother Guthfrith came from Dublin to claim his brother’s throne in the name of his nephew Olaf. Aethelstan led his army north and evicted Guthfrith so quickly he couldn’t make it back to Dublin and fled to Scotland.

Aethelstan called together a summit of various leaders of Britain. They included from Wales, Hywel of the West Welsh and Owain of Gwent, along with King Constantine of the Scots and from the northern kingdom based in Bamburgh, Ealdred, son of Eadwulf. They met at Eamont Bridge near Penrith on July 12, 927. These leaders acknowledged Aethelstan as overlord by swearing allegiance. They also promised not to support Guthfrith or other Vikings and to suppress paganism. Guthfrith was eventually captured. Aethelstan entertained him lavishly and then exiled him to Dublin. Aethelstan proceeded to raze the Norse defenses to the ground.

Aethelstan wanted to expand and widen his kingdom so he next turned to the west. He subdued some of the Welsh leaders, forcing them to swear allegiance, pay tribute and agree to boundaries. During Aethelstan’s reign, Welsh leaders were frequent visitors at his court and he treated them with great respect. After dealing with the Welsh, Aethelstan went into Cornwall where there appears to have been an uprising. He now ruled a multi-national kingdom that stretched from the Channel to the Scots border. After this there was relative peace in the kingdom for the next seven years.

Aethelstan’s court was constantly on the move according to where the food supplies were and for the most part stayed within Wessex. The court and the Witan (council) grew much bigger than the small group of advisors to his grandfather Alfred. This was inevitable due to the expansion of the kingdom. The form of universal education begun under Alfred was beginning to pay off by the time of Aethelstan and literacy was quite common. He formed a court school or chapel comparable to his grandfather’s. This school was in contact with the continent and began producing manuscripts and training scholars. This led to many charters which still survive, giving us insight into the reign of Aethelstan and into Anglo-Saxon life in general.

Six different law codes date from his reign. He also attempted to reform the coinage of the realm. There was to be one coinage and they were minted only in specific towns. Aethelstan was very devout and generous with his gifts to religious foundations. The one contemporary portrayal of him depicts him giving a copy of Bede’s “Lives of St. Cuthbert” to Saint Cuthbert himself. He was an avid collector of saints’ relics and books and a patron of poets at his court. Aethelstan loved hunting, falconry and practicing his skillfulness with the sword.

Many European leaders tried to cultivate good relations with Aethelstan. Aethelstan married several of his sisters to continental rulers. Harold Fairhair, the first King of Norway is said to have sent an embassy in friendship to Aethelstan, along with a beautifully decked out ship. The German king Henry the Fowler, who married one of Aethelstan’s sisters, sent him many gifts. They included perfumes, jewels, (especially emeralds), many horses with trappings, an alabaster vase, the Sword of Constantine and the spear of Charlemagne. Many European leaders sent him saints’ relics as he was a renowned collector.

Among others Aethelstan fostered his exiled nephew Louis d’Outremer of Francia, Count Alain, son of Matuedoi of Phor in Brittany and the son of King Constantine of the Scots who was brought back as a hostage from the campaign in 934. He possibly fostered Haakon, the son of Harold Fairhair. Aethelstan gave Louis limited help in reclaiming his throne in 936. He also helped Alain drive the Vikings out of Brittany.

Aethelstan promised his half-brothers the throne as his successors. After Aelfweard died, his brother Edwin survived from King Edward’s second wife. Edwin was to die in mysterious circumstances, apparently drowning at sea in 933. Whether this was by order of Aethelstan or an accident we will never know. Aethelstan had two much younger half- brothers by Edward’s third wife, Edmund and Eadred who actually did succeed him. He showed great affection for these young men and brought them up lovingly at court. His promise to his stepbrothers is sometimes given as a reason for him never marrying. Aethelstan may have also wanted to live a life of chastity.

Interactions with Scotland had deteriorated in 934 for unknown reasons and Aethelstan went north on a well-organized campaign by land and by sea. He was successful in quelling the rebellion but King Constantine went in search of allies to retaliate. The result was the Battle of Brunanburh in 937. King Aethelstan and his brother Edmund along with West Saxons, Mercians, Danes and the Welsh fought against the combined forces of Olaf Guthfrithson, Norse king of Dublin, King Constantine II of the Scots, and Owen I, King of Strathclyde. The battle is mentioned in many sources, including Old English, Middle English, Latin, Welsh, Irish and Icelandic. The Anglo-Saxon Chronicle includes a contemporary poem in Old English called “Battle of Brunanburh”.

The battle was very bloody and lasted all day. Most of the combined forces and their leaders were killed. It was a resounding victory for Aethelstan and his men. The exact location of the battle is unknown but the best guess is it happened somewhere in the Wirral Peninsula.

For the last two years of Aethelstan’s reign, he enjoyed immense power. No one dared to challenge him. He was a most effective ruler both at home and abroad. He was to die suddenly, possibly at Gloucester, on October 27, 939 around the age of forty-five. At his own request, his body was taken to Malmesbury and buried there. His death caused a revolt in York which spread to the Danelaw before Edmund could stop it. Aethelstan’s English kingdom broke apart until it was permanently reunited in 954.

Sources: “Aethelstan, The First King of England” by Sarah Foot, “The Saxon and Norman Kings” by Christopher Brooke, “The Kings and Queens of Anglo-Saxon England” by Timothy Venning, “Unification and Conquest: A Political and Social History of England in the Tenth and Eleventh Centuries” by Pauline Stafford, “The Warrior Kings of Saxon England” by Ralph Whitlock

King Edmund the Martyr Killed by the Great Heathen Army

The Queen appoints new members to the Order of the Garter