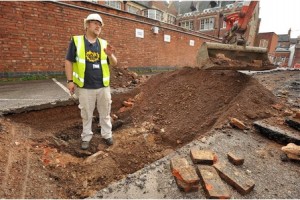 Calling all Year 12 students in the Leicester area! This would be an excellent opportunity for anyone interested in History or Archaeology. Get your applications in now.

Year 12 students around the country have a unique opportunity to work side by side with the University of Leicester archaeologists who discovered King Richard III.

The University of Leicester is offering an internship for a Year 12 student to work on a second excavation of the Grey Friars site in Leicester where the remains of the medieval king were uncovered in September 2012.

As part of the month-long paid post, the intern will learn key archaeological skills and processes and will have the chance to make new discoveries in the remnants of the Grey Friars church.

During the dig, the archaeologists hope to expose the whole east end of the church of the Franciscan friary, revealing evidence for the plan and architecture of the choir and presbytery.

They expect to recover building materials – floor tiles, roof tiles and window fragments – which will help us to reconstruct the appearance of the church before it was demolished soon after the Dissolution in 1538.

The interns will be given full training and mentoring by the archaeologists throughout the dig, and will receive a £1000 bursary for the month.

All entrants will be invited to the dig site to meet Richard Buckley and the search team – regardless of whether they secure the internship.

The University will be looking for candidates who are interested in studying archaeology after they finish their A-levels or equivalent studies.

There will also be an internship available for current University of Leicester Archaeology undergraduates.

Richard Buckley, lead archaeologist on the University of Leicester’s Search for Richard III, said: “This is a great opportunity for a budding archaeologist to see an excavation through from start to finish, learning how we use mechanical excavators to expose the archaeology, then using hand tools to clean, define and excavate features relating to the church in which Richard III was buried in 1485.

“Our interns will be given the chance to share in the excitement of discovery, helping to uncover the choir and presbytery of the church and recover finds which will tell us more about the date and appearance of the building and what happened to it after it was dissolved in 1538.

“They will also learn how to record the archaeology through drawings, photographs and written records and how to process finds that come up.

“It is very rare indeed for archaeologists to get the chance to investigate a site in the middle of a city for purely research purposes, even more so to dig one with royal associations like this one.”

Anyone interested in applying is asked to contact Charlotte Barratt, Richard III Outreach Officer at the University of Leicester, for an application form. Please visit: www2.le.ac.uk/departments/archaeology/richard-iii-internship

The deadline for applications is midnight Sunday 23rd June, and the successful interns will be notified on 26th June 2013.

The Search for Richard III was led by the University of Leicester, working with Leicester City Council, and in association with the Richard III Society.