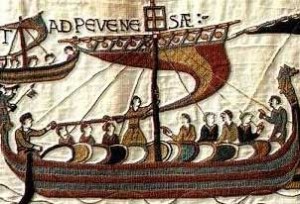 Plundering, pillaging and plenty of sea food — what wasn’t to like about the life of a Viking?

How it sometimes ended, suggests an archeological study in the current Oxford Journal of Archeology. In the study led by Mark Pollard of the United Kingdom’s University of Oxford, archeologists thought they had uncovered the victims of England’s St. Brice’s Day Massacre in 1002 A.D.

The 1002 massacre was “a most just extermination” in the words of King Aethelred the Unready, of Danes cluttering up the English countryside that took place at St. Frideswide’s Church, now Christ Church Cathedral, in Oxford. Scandinavian Viking raiders had harried the English coast in the Middle Ages, expeditions that lasted two centuries, creating long-lasting friction between Danes and Saxons. The massacre victims (who reportedly included the sister of Denmark’s King Sweyn Forkbeard, who along with Aethelred the Unready, is worth mentioning just for the sake of wondering why kings today have such boring names) had walled themselves for sanctuary inside a church, which the townsfolk burned down to murder them. “Afterwards, with God’s aid, it was renewed by me,” King Aethelread noted in a royal proclamation on rebuilding the church.

So, when archeologists found the bones of at least 33 men, and two teenagers, in an ancient ditch near the massacre site four years ago, some supposed they had found some of the massacre victims. “The skeletal remains were dumped in a mass grave, and had clearly been thrown in one on top of another,” said the study, noting the bones showed, “multiple serious perimortem (around the time of death) injuries, most commonly multiple blade wounds, as well as many healed wounds, suggesting they may have been professional soldiers..”

“Several of the skeletons showed evidence of charring, which was not reflected in the local grave fill, suggesting that they had been exposed to burning before burial – an observation which heightened the suspicion that these may be some of the victims of the burning of St Frideswide’s Church.”

“Taken together, this evidence left little doubt that these bodies were the result of a mass execution,” said the authors.

But something a bit unexpected turned up when the archeologists tried carbon dating of the bones from three of the skeletons.

“The radiocarbon dates are very consistent,” found the researchers, “…but with calibrated age ranges which do not encompass ‘expected’ date of AD 1002.” Instead the age range of the bones was somewhere from 940 to 970 A.D.

Well. Perhaps the seafood diet of Danes might result in a shift in the type of carbon in their bones. This “marine reservoir effect” that can throw off carbon dating by as much as 400 years, the team suggested.