I will start out by saying this is the first Sims game i have ever played. The Sims never appealed to my gaming taste. Guiding a cyber-human through mundane daily tasks, after I just finished my own real-life mundane daily tasks just didn’t sound like entertainment. Then along came Sims Medieval and it sounded more to my liking. Create a character with a medieval role, squire, jester, knight, whatever and then go questing for riches and glory. Huzzah!

Once you create a new character and customize the look you start in your house with the basic items, bed, food, etc. When you are ready head out into the kingdom and start your quests. The quest include fighting bandits, catching fish and gathering plants to create a potion. While traveling the kingdom you encounter other villagers. As you interact with them they will either be your friend of enemy depending on how you act toward them.

Your Sim has needs

There are four attributes that you need to sustain in order to keep your Sim active; Eat, Sleep, Socialize and Entertainment. At some point in the game your Sim will get hungry or tired or want to talk to someone. These are the tasks that turned me off from the original Sims. Socializing and entertainment are fairly simply, talk to someone or play some darts and your Sim is happy. But the eating and sleeping take too much time. While your Sim sleeps you do nothing…for a few minutes. You just hang out watching your Sim sleep as the time ticks by. A better way to handle the sleep task would be to give the option to sleep for 2,4 or 8 hours and then just advance the time that far and be done. Sitting around waiting for the Sim to wake is a major drag.

Quests could be better

At first I thought the quest were easy because your character was new. As the game progresses not only do the quests stay easy, they become silly to the point of childish. One ‘quest’ was to go into peoples houses and kick over their garbage cans. You read that correctly, kick over garbage cans. Another was to scare 5 villagers and yet another was to catch 20 pounds of fish in one session. OK that one wasn’t childish, just boring. It’s like the developers asked a kindergarten class for quest ideas. However the game does use the technology of the iPhone for fishing. You must quickly pivot the iPhone forward to cast your line. Once a fish is caught you quickly pivot the iPhone back to reel the fish in. 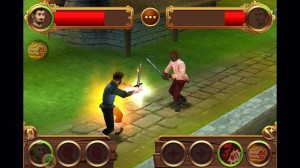 Well, you only get a little of it in the Sims Medieval. On the combat screen there is a picture of your Sim in the top left. When the green circle around your picture is full you can attack. When you start combat, attacking is back and forth. As you progress you can attack faster and get in two hits to your opponents one. None of the fights were hard enough to really worry about it though. The only time I lost a fight was when I refused to eat or sleep and my health was at half. Combat is simplistic and relies on button pressing. Swiping the enemy with your finger to attack with the sword would be a better use of the technology.

My Kingdom for uh, a Kingdom

When the game starts there are few places to visit, a tavern, the market and the herbalist. Seemed a little small. As you complete more quests the kingdom grows to include a church, forests and a castle. But even the castle is limited in size. The kingdom never gets big enough, it feels small and limited. 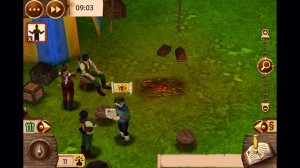 The whole social aspect escapes me. I have no desire to play a game so I can ‘get married’, or decorate my house, or form a medieval boy band. For those of you who do like that sort of thing Sims Medieval offers it up. But since this isn’t an online game you only have computer controlled Sims to interact with.

Unfortunately for Sims Medieval it sounds better than it actually is. I spent way to much time eating and sleeping and not enough time questing. Combat wasn’t exciting and there was no fear of losing. The quests were simply and juvenile. The interaction with other characters is unrewarding as well. There is no speech interaction, just dialog windows. The audience for this game are the Sim die-hards. Don’t let the ‘medieval’ in the title fool you, it offers nothing exciting for a medievalist.

Do you love the Sims Medieval iPhone App? Do you hate it? Leave your feedback in the comment section below.