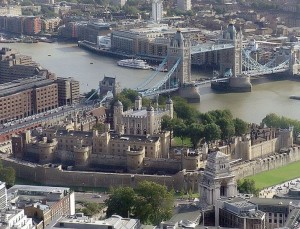 The Tower of London is, compellingly and unquestionably, one of the most famous attractions in the capital. Its abundant and absorbing past will not fail to enchant you. Take a Tower of London tour with Golden Tours and investigate this noteworthy landmark.

Ensure you afford some time in ascertaining what life was like imprisoned in the Bloody or Beauchamp Towers when you visit inside the Tower of London. Even marvel at some of the messages prisoners left behind in the walls.

The Medieval Palace comprises of lavish interiors. Delve into the intricacies of what life was like in a startlingly opulent medieval household on your Tower of London tour.

The White Tower was the original Tower of London. Begun by William the Conqueror around 1080, it would have made a protective, formidable home for the newly crowned Norman invader. The most wide-ranging assortment of armour in Europe is held in the White Tower, including Henry VIII’s personal armoury. It even holds a rather disquieting variety of torture instruments and historical weapons.

A world renowned symbol of London and Britain, the White Tower presently includes ‘Power House’, a captivating exhibition about the national institutions established at the Tower of London.

Explore the intriguing narrative behind the rare animals held for over 600 years in the Royal Menagerie of the Tower. Owning exotic and remarkable animals was a sign of strong social standing and clout. The first record of wild animals at the Tower of London was in 1210, during the reign of King John. The first royal beasts to arrive at the Tower – the lions, polar bear and elephant – came from Europe and North Africa. Over 600 years later, there were over 60 species on show, including tigers from Asia, alligators from the Americas and kangaroos from Australia.

The ‘Beefeaters’, as they are nicknamed, have long been symbols of London and Britain. It is thought their nickname is derived from their position in the Royal Bodyguard, which permitted them to eat as much beef as they wanted from the king’s table.

Take Tower of London tours and you will be astounded and appalled by their tales, which have been passed down for generations.

You will not fail to be overwhelmed by the incomparable Crown Jewels, and viewing these is crucial feature on any Tower of London tour. The Jewels are held in most visible vault on the globe. Thousands of sparkling gem stones and yards of silver gilt make for a priceless display of royal ornament. Every jewel has its own distinctive and compelling regal narrative. The Maundy Dish and Imperial State Crown are still vital components in annual monarchical ceremonies. The Jewels are kept constantly under armed guard in the Jewel House. You are sure to be astounded by the 23,578 gems that make up the Crown Jewels.

The Tower of London holds an extraordinarily sweeping, turbulent history of which you may not be aware. Intrigued? Delve into the complex, often nigh implausible past stories connected to one of the ultimate London attractions. Visit inside the Tower of London for an at times alarming, yet, all in all riveting thing to do in London.