Merlin Will Return For A Fifth Series 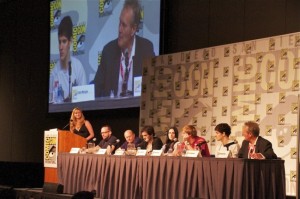 It was announced Sunday that hit television show MERLIN, produced and created by Shine TV, has been commissioned for a fifth season by the BBC. The news was revealed during a special MERLIN panel at Comic-Con International panel on Sunday, July 24 that featured cast members Anthony Head, Bradley James, Katie McGrath and Colin Morgan, and executive producers and co-creators Johnny Capps and Julian Murphy.

MERLIN airs on Syfy in the United States. Season four will premiere in early 2012.

MERLIN’s success and popularity continues to flourish across the globe, FME, who has invested in the fifth season of MERLIN alongside UK broadcaster BBC One, has now sold MERLIN to over 52 broadcasters in more than 183 countries including Syfy (USA), RTL (Germany), Disney (South America), Canal + (France) and Network 10 (Australia).

David Ellender, Global CEO, FME commented, “With MERLIN now in 183 countries and both a fourth and fifth season underway, it is a truly global brand. Consistent audience figures in each territory, a strong international fan base and a fantastic cast further cement its cross generational appeal. We are continuing to work with the best broadcasters, producers and licensing partners on this brand and look forward to its on-going success.”

Johnny Capps and Julian Murphy, executive producers for Shine TV, said: “We are both delighted to have a fifth season commissioned and thrilled with the worldwide success of MERLIN. We have some fantastic ideas in mind for the next stage of the journey and relish the chance to take the program to the next level!”

The fourth season of the fantasy drama, which is currently being filmed in Pierrefonds, France and Cardiff, Wales, will begin airing in Autumn 2011 on BBC One in the UK, and in early 2012 on Syfy in the US.

The third season, which was broadcast in winter 2010, pulled in the highest UK ratings for the drama so far, with a weekly average of over 6 million viewers and a total of 24.3% share of the audience.

Launched in 2008, MERLIN tells the story of young Merlin in Camelot as he comes to grips with his powers and destiny. The epic fourth season of MERLIN sees Camelot on the brink of a Golden Age as the familiar blend of magic, mystery and action adventure returns. With Morgana now a dangerous outcast, Merlin must use all his power to ensure that Arthur fulfils his destiny as the Once and Future King. No further details about plot or characters have been revealed yet for the fifth season.