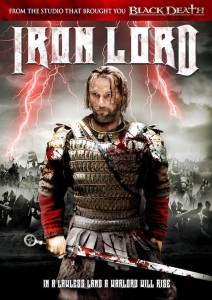 Revolver Entertainment are pleased to announce the multi-platform release of IRON LORD on August 1st.

Russia 1010: Warlord Yaroslav rules the kingdoms to the North of Kiev with an iron fist, conquering new lands to gather taxes for his father, Grand Prince Vladimir.

But keeping rule in these bloody times is a constant battle, as barbarian hordes are ransacking local settlements to enslave those fit for sale. Stumbling on the deserted villages, Yaroslav must stand defiant and defeat the ruthless bandits to restore his power over the region.

Iron Lord is the story about the Russian kingdoms of the North, in the year 1010. They are governed by the sons of Grand Prince Vladimir of Kiev. His strongest son, the warlord Yaroslav uses his power to expand the principality and attach it to new lands, gathering taxes wherever he conquers. But keeping rule is easier said than done as bandit hordes, occupying the woodlands along the roads and rivers are ransacking villages to recruit slaves selling the villagers to the Bulgars for profit. Yaroslav must hunt them down and defeat them to once again restore his power over the region.

Son of the grand prince Vladimir, Yaroslav was vice-regent of Novgorod at the time of his father’s death in 1015. Then his eldest surviving brother, Svyatopolk the Accursed, killed three of his other brothers and seized power in Kiev. Yaroslav, with the active support of the Novgorodians and the help of Varangian (Viking) mercenaries, defeated Svyatopolk and became the grand prince of Kiev in 1019.

Yaroslav began consolidating the Kievan state through both cultural and administrative improvements and through military campaigns. He promoted the spread of Christianity in the Kievan state, gathered a large collection of books, and employed many scribes to translate Greek religious texts into the Slavic language. He founded churches and monasteries and issued statutes regulating the legal position of the Christian Church and the rights of the clergy. With the help of Byzantine architects and craftsmen, Yaroslav fortified and beautified Kiev along Byzantine lines. He built the majestic Cathedral of St. Sophia and the famous Golden Gate of the Kievan fortress. Under Yaroslav the codification of legal customs and princely enactments was begun, and this work served as the basis for a law code called the Russkaya Pravda (“Russian Justice”).

Yaroslav pursued an active foreign policy, and his forces won several notable military victories. He regained Galicia from the Poles, decisively defeated the nomadic Pechenegs on the Kievan state’s southern frontier, and expanded Kievan possessions in the Baltic region, suppressing the Lithuanians, Estonians, and Finnish tribes. His military campaign against Constantinople in 1043 was a failure, however.

Trade with the East and West played an important role in Kievan Rus in the 11th century, and Yaroslav maintained diplomatic relations with the European states. His daughters Elizabeth, Anna, and Anastasia were married respectively to Harald III of Norway, Henry I of France, and Andrew I of Hungary.

In his testament, Yaroslav sought to prevent a power struggle among his five sons by dividing his empire among them and enjoining the younger four sons to obey the eldest, Izyaslav, who was to succeed his father as grand prince of Kiev. This advice had no lasting effect, and civil war ensued after Yaroslav’s death.