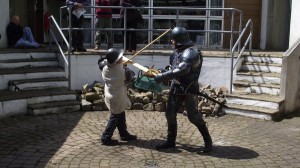 Historic happenings aren’t unusual at a museum, but visitors to the Yorkshire Dales National Park got a little more than they bargained for.

A pike drill led by a fully armoured medieval soldier was just one of the activities at the Dales Countryside Museum in Hawes to celebrate the fifth birthday of the Yorkshire Dales Young Archaeologists’ Club (YDYAC).

The club is for young people interested in history and archaeology and is a collaboration between the Council for British Archaeology and the Yorkshire Dales National Park Authority, which owns the museum.

It is based at the museum and sessions have been run almost every month since it began in June, 2006.

As part of the birthday celebrations, the club welcomed members of the Red Wyvern re-enactment group to support this year’s theme of medieval life. There was a shoe maker, an apothecary, a fisherman, an archery display, a knights’ school and the terrifying pike drill.

Club leader Keith Webster said: “The club is a huge success and a credit to our members and leaders, who travel considerable distances to discover more about their past each month. Our annual themes have included prehistory and the Vikings, along with archaeological methods and, of course, the medieval world. It’s tremendous fun, and as the majority of the leaders are volunteers, we must get a great deal from it too.”

Memorable meetings include site visits to Maiden Castle, Ribblehead viaduct, the Jorvik Viking Centre, Coverham Church, the Viking Festival at Burnsall, the Roman Fort at Vindolanda and a Viking longhouse on the flanks of Ingleborough.

Keith said: “We are always very lucky with the people we use to support our meetings. Red Wyvern were brilliant, and our team of leaders always give 100 per cent when leading or supporting sessions.”

Museum Manager Fiona Rosher said: “Over the last five years the club has gone from strength to strength. We really value the connection with the Young Archaeologists and we are thrilled to see the way in which the young people respond to the activities we host. The club is a wonderful way in which young people can be inspired to investigate their local heritage.” 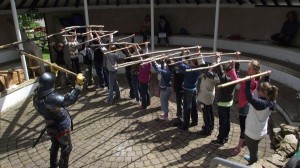 Although the fifth birthday celebration looked back at the good work of the past, the club – which has a waiting list for membership – is also very focused on the future.

The rest of this year will see Young Archaeologists enjoying a visit to Bolton Castle and Fountains Abbey, as well as experimenting with heraldry, stone-hurling trebuchet catapults and medieval food.