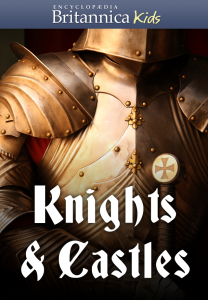 Britannica Kids: Knights and Castles conveys the grandeur and pageantry of that bygone era with a rich combination of imagery, games and fact-packed articles from Britannica’s editors.

The pomp and pageantry of the Middle Ages comes back to life in the newest education app from Encyclopaedia Britannica Kids.

Britannica Kids: Knights and Castles conveys the grandeur and pageantry of that bygone era with a rich combination of imagery, games and fact-packed articles from Britannica’s editors. Users are given a complete picture of the medieval period with special coverage of knighthood, castles, battle armor and armaments, tournaments, legends and fables. These topics are designed for kids ages 8-13.

This latest program brings the Britannica Kids series of apps to nine, each providing a fun and interactive treatment of a major school topic in science, history or social studies. The series, created for the iPhone, iPad and iPod Touch, includes Dinosaurs, Solar System, Ancient Egypt, Ancient Rome, Snakes and more.

Besides factual and engaging articles, the apps include interactive games, such as a photographic memory-match, virtual jigsaw puzzles, photo “brush-offs,” and magic-square puzzles. These games and quizzes let kids test themselves on what they’ve learned.

“The apps have been a hit with kids, parents and teachers,” said John Russell, director of business development for Encyclopaedia Britannica Kids. “The combination of popular topics and engaging features means kids learn and have some fun at the same time.”

Britannica Kids: Knights and Castles is now available for $4.99 US on Apple’s Apps Store. A limited number of free access codes are available for journalists and reviewers on a first-come, first-served basis.

About Concentric Sky
Concentric Sky offers high-end web development and consulting services with a focus on emerging technologies such as Social Media and the iPhone. Founded in 2005, the company has rapidly become a leader in the space, recently signing an exclusive development partnership with social media pioneer Mashable.com. Concentric Sky is based in Eugene, Oregon and consists of about 50 software engineers and technical professionals. For more information: http://www.concentricsky.com.