We have another guest post today. This time on Medieval Law. It is brought to you by Jonathan Arnold. Jonathan is a practicing attorney in California. He teaches law and is a legal historian. I would like to thank Jonathan for his contribution. 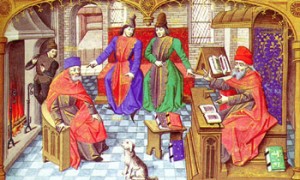 Actually, any discussion of Medieval Law should really be entitled Medieval Laws
because during the Middle Ages, there were several bodies of law being applied, adapted
and developed…and already forming our modern legal system. Elements of these
Medieval laws have come down to us in our many current forms of pleading, our present
jury system and, especially, commercial law. Let’s take a survey of some Medieval laws.

The first law to which we’ll turn is Roman Law; that is, the law of the Roman –
and later Byzantine – Empire. During the “classical” Roman Empire, this law was first
collected and published in the Twelve Tables and later greatly expanded and codified
during the reign of Justinian, taking the name the Corpus Juris Civilis. The Corpus Juris
first came out sometime around 534, covering everything from natural law, to tutors, to
land, to inheritance, to written obligations, to partnership, to theft, to judges; pretty much
everything one might need to run an empire…reasonably well. The Corpus Juris Civilis
was revived and adapted by Western Europe during the later Medieval period – around
1,000 as trade and commerce really began to expand throughout Europe, thus becoming
the continental or “Civil Law” (and selectively imported into England, informing the
“Common Law” of the British Isles – we’ll turn to that in a moment). As to Western
European Law, much of the jurisprudence contained within the Corpus Juris Civilis
substantially influenced the much later Napoleonic Code, which itself formed the basis of
much modern European Law.

The second law we’ll turn to is what is known as customary law. One vibrant subset
of this was “trial by combat”; parties to a dispute could basically fight it out, and the
stronger party (theoretically supported by “truth”) would somehow prevail. Variations to
fighting in this system included the ordeal of water: a priest would invoke a tub of water
to not accept a liar, after which the accused would then be lowered in. If the accused
floated, guilt was pronounced, as the water would be “rejecting” a liar. Interestingly, once
the parties had set upon some form of trial by combat, they each had to retire to a local
monastery where they were secluded for anywhere from several days to almost a month,
compelled to pray, fast and seek the counsel of a priest, who would query them again and
again and again to discover if they might want to “settle” instead. Most litigants did.

The third law we’ll look at is that of England…again, laws is more precise here
because at the time of the Norman Conquest in 1066 there were present the operation of
customary – that is, tribal – law, Germanic and Danish law and, to a lesser extent, the
residue of Roman Law from the time the Roman Empire had administered England as the
Roman province known as Britannia. The Normans left greatly undisturbed the laws they
found in operation in England after their conquest and allowed local lords to administer
law as they found fit. Procedure, though, was precise and, basically, in order to obtain
and enforce the law, a written order – or Writ – would have to be obtained from the King
that essentially commanded the defendant to appear before a local court, aided by the
local sheriff, and answer the charges made against him. Importantly, the writ contained
very specific language for what it was for and the plaintiff had to follow its form
precisely. Over time, another law – Equity – was developed in England (and somewhat
informed by expediency, custom and the Roman Corpus Juris Civilis) to make the writ
system a bit more flexible…and hopefully more applicable to the newer sorts of disputes
that developed…as well as fairer in outcome.

Our modern litigation system and method of pleading owe much to this medieval
system. Another Medieval legal precedent was what became to be known as the jury,
which had as its genesis a group of local townsfolk who would make inquiries into the
“facts” of a case and aid the lord or judge in deciding the case. This procedure become
more formalized as time passed and progressed into the English – and later American –
jury system, which today is one of the hallmarks of modern legal system.

The fourth law we’ll touch upon is the Law Merchant or mercantile law.
Remember the rigid medieval writ system? For commercial transactions, and there were
many during the medieval period, imagine if you transported goods – say wool – from
France to England and were not paid. There was no precise writ that would exactly speak
to this situation…in fact, the best recourse was pleading on a writ known indebitatus
assumpsit, wherein you would stretch the already rigid writ of assumpsit whenever you
had already delivered the goods to the defendant and now wanted your money. This
might work or it might not. However, mercantile courts existed along the major trade
routes used in the Middle Ages and these courts generally applied a law, lex mercatoria,
which contained both merchants’ customs and best commercial practices, including
observance of both oral and written agreements, letters of credit and deciding cases not so
much on technical writ-based procedural law, but much more on what was fair and
appropriate for each case. Our modern systems of commercial law, including banking and
transportation all had as their genesis this Medieval law, the lex mercatoria. And much of
the Medieval period still echoes in today’s law – including the use of Latin by lawyers.

Medieval Law and the Romans