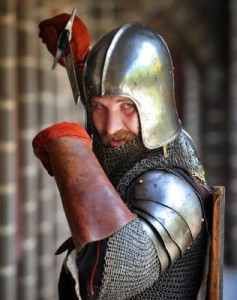 Not so much an actor as a re-enactor, authenticity is the name of the game for this lover of history, writes Sarah Hudson

When PaulMichael Donovan does his weekly shop in Ballarat’s main street, he is easy to spot – he’s the one wearing medieval chain mail and a coat of armour.

“I sometimes wear monk’s robes too, or a Victorian top hat and great coat,” PaulMichael says.

“I once walked into a bank in my chain mail and the teller later told me she had her finger on the button ready to call the cops, I was such a sight.

“It depends what I’ve been doing that day as to what I’m wearing.”

What PaulMichael has been doing that day is generally time travelling through history – from ancient Rome to World War II, Viking warriors to 14th-century Persia – and all in the name of his devotion to the past.

On any one day that devotion can take the form of his job – as an educator with his business, Live Yore History, which travels around schools and to businesses and community groups bringing history to life.

Alternatively, his devotion can take the form of his hobby – as the founding member of Ballarat’s Living History Society.

The society is a curious clique of 15 members who meet twice weekly and spend weekends recreating and re-enacting slices of history, whether it’s medieval battles – (PaulMichael learnt the painful way about the value of chain mail) – or a feast from the Dark Ages (his ultimate ancient meal is a swan stuffed with a turkey, then stuffed with a goose, duck, chicken, pigeon, quail and, finally, garlic).

In his spare time PaulMichael studies history at Deakin University and spends days making costumes and historical paraphernalia – he’s just finished hand-sewing an Arabesque red and blue tent, as well as a 14th-century nobleman’s wool brocade tunic, and he’s now on the hunt for a 1777 Charleville musket for an upcoming 18th-century battle.

If all this sounds a little odd, eccentric even, then it pays to consider this is not a fringe group.

History lovers, or re-enactors as they prefer to be known, number in their thousands around Australia, with re-enactments held on most weekends of the year around the state and country.

In Ballarat alone there are several societies dedicated to recreating history, including the local branch of the international Society for Creative Anachronism, The Friends of Sovereign Hill and The New Varangian Guard.