The 7 Fiercest Gauntlet Gloves of the Medieval Times 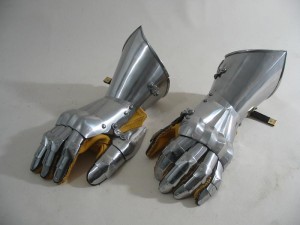 During the Medieval Ages, a lot of armor was required during battle. Gauntlet gloves were particularly important because hands were extremely vulnerable during hand to hand combat.

Throughout the centuries, the design and style of the gauntlet evolved. Different styles and materials were used to try to maintain the best combination of overall protection and easy movement of the hand. Leather gauntlets, steel gauntlets, and chainmail mittons are just some of the various styles developed for knights and warriors (www.medievalcostumesandgifts.com).

Below are the 7 toughest gauntlet gloves:

(1) Gothic Gauntlet – Made from many small plates intricately placed together with sliding and pivoting rivets. The fingers are made of gatlings and scales.

(2) Locking Gauntlet/Forbidden Gauntlet – Used in 16th century, known for its extra long fingers that could lock to the wrist in order to prevent a sword, axe or mace from being removed from warrior’s hands. This type of gauntlet was forbidden during tournaments, which is how it got the name “Forbidden Gauntlet.”

(3) Blade Seizing Gauntlet – This gauntlet needs no further explanation. It is just awesome.

(4) Manifer (Bridle) Gauntlet – Usually made of thick leather, this gauntlet glove covers the forearm and the entire hand. However, the shape of the cup that protects the hands allows the fingers to move freely underneath.

(5) Scale Gauntlet – The scales offered ultimate protection and offered more mobility of the arm and hand, a great combination for knights in combat. This gauntlet glove also had chainmail in the fingers, wrist and elbow areas to make bending easier.

(6) Palm Gauntlet – This glove offered extra wrist and forearm protection. It was smaller than other gauntlets usually covering the entire hand, wrist and a small portion of the forearm. However, it offered ultimate comfort, protection and mobility.

(7) Falconers Gauntlet – Usually made of thick leather, this glove covered the entire top of the hand and the arm all the way up to the elbow. It is a must see, a very modern looking gauntlet that was created in the 1600’s.

Gauntlets are still used today as key accessories to medieval costumes. Gauntlet gloves are also used in SCA, Society for Creative Anachronism re-enactments and LARP, Live Action Role-Playing, events. Gauntlets can also be spotted at medieval fairs. Armor this great will not lose its popularity amongst medieval fans.

To get your gauntlets visit Medieval Costumes and Gifts.

Ancient craftsman setting up business on Isle of Man