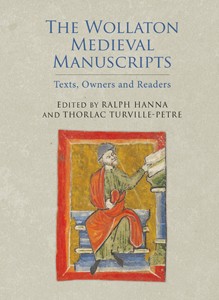 The Wollaton Medieval Manuscripts… Texts, Owners and Readers is the culmination of a major research project at The University of Nottingham into this nationally important regional collection.

The largest surviving family-owned library of medieval manuscripts in Britain can now be enjoyed by everyone thanks to the publication of a new book telling its fascinating story.

The Wollaton Medieval Manuscripts… Texts, Owners and Readers is the culmination of a major research project at The University of Nottingham into this nationally important regional collection.

The large, beautifully illustrated hardback volume tells the story of Nottinghamshire’s landowning Willoughby family, and the extensive library of rare medieval manuscripts they collected during the 15th and 16th centuries. The collection includes important examples of Latin, French, Anglo-Norman and Middle English literature from the 13th to 15th centuries.

The manuscripts, along with a huge collection of family archives, were originally housed in the family library at Wollaton in Nottingham, and transferred to the present hall, built by Sir Francis Willoughby in the 1580s, which the family owned until the 1920s when it was bought by the city council.

The new book describes all the medieval books once part of the library, focusing on 10 manuscripts in the Wollaton Library Collection which are now in the care of the University’s Department of Manuscripts and Special Collections. Essays by a variety of academic and curatorial experts explore various aspects including the history of the library and the Willoughbys’ motivation for collecting such a wide range of medieval books and papers.

Co-editor of the book, Professor Thorlac Turville-Petre from the School of English Studies said:

“It has been a great privilege to uncover the history of this important medieval library and the project has given us a fascinating insight into the cultural life of a Nottinghamshire family in the Middle Ages. We’ve made many discoveries along the way that were entirely unexpected. I’m delighted the publishers have produced such an attractive book which will appeal to anyone interested in the cultural life of the past”.

One of the fascinating areas explored in the book is the practical issue of the conservation and curating of the ancient and fragile manuscripts. Dr Dorothy Johnston, Keeper of the University’s Manuscripts and Special Collections, said:

“The research undertaken for this book has enabled us to discover more about the physical history of these manuscripts and the balance which owners have always had to make between use and preservation.”

Also included in the volume is a chapter on the Wollaton Antiphonal, a beautifully decorated medieval service book originally owned by Sir Thomas Chaworth (d.1459) but later acquired by St Leonard’s Parish Church in Wollaton. Another highlight is an exploration of The Wollaton Hall Gower Manuscript. John Gower, a contemporary of Geoffrey Chaucer, wrote his masterpiece of medieval English poetry, Confessio Amantis , in the late 14th century.

The book also contains a complete catalogue and full-colour illustrations of the Wollaton Library Collection including manuscripts and early printed books now owned by collectors as far afield as New York and Tokyo.

Further work on the Wollaton Library Collection is continuing at the University, thanks to support from the Heritage Lottery Fund. This began with conservation and preservation work, including the creation of good quality digital surrogates to assist detail study and limit handling. A web resource has been created about the life of medieval women, as featured in the University’s collections, and online line content is being prepared to support further study by schools and researchers.