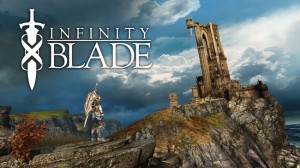 The best games are the ones that never end. Infinity Blade, the new highest-grossing app on the App Store, doesn’t just have a cool name, it follows through very literally. This never-ending tale takes place on a simple battlefield, a medieval castle with demons guarding every doorway and stairwell, and players taking on the role of a scruffy knight in pursuit of truth, justice, and the American way. Well, almost.

First things first: Infinity Blade looks amazing. I can’t say without a doubt that it’s the best looking game on the iPhone and iPad, because the recently released Rage HD from id Software is also a visual stunner. The two games take very different approaches to graphics. Epic Games developer Chair Entertainment’s uses well-lit and large areas, excellent geometry and some simple animations, whereas Rage HD utilizes heavy darks and a lot of fast-moving high-quality textures. And while both Infinity Blade and Rage HD are highly restrictive games (see below), the Unreal Engine 3 running Infinity Blade isn’t limited to just this play style. As Epic Vice President Mark Rein showed me earlier this year, there are some very interesting and unique things coming from the game developer in terms of more classic controls on touch surfaces.

Back to Infinity Blade. The story follows a simple, almost effortless plot of a knight attempting to clear the land of a tyrannical ruler. The first scenes of the game introduce our knight and final boss, where the outcome is unexpected: players lose. Stabbed through the heart, the victor explains the catch: the knight’s progeny may fare better. Lo and behold, the real title screen comes up and our knight returns with a subtitle, 21 years later, and a promise to avenge his father.

This genealogical lineage is a brilliant twist to make a game everlasting without needing difficulty settings. Each time through the castle gives yet another chance to face off against the final boss, and if defeated, a new son will emerge two decades later to avenge his father, for ever and ever. Epic proliferates this notion of forever play by including upgrades to weapons, shields, armor, helmets and magical rings, with experience that passes from generation to generation. It takes about 13 lineages to collect all of the game’s items, and at least another whole lineage to master all items collected. That adds up to about 7 hours of gameplay.

Gameplay uses a simple sword-play mechanic, essentially a game of rock-paper-scissors. Players must dodge, parry or block attacks to throw enemies off balance, then strike by sliding a finger across the screen in the direction you choose the sword to go. Parrying is difficult because the swiping action is identical to an attack, and I’ve found that the knight would attack instead of parrying 80% if the time. Dodging requires pushing a virtual button on either side of the screen, while blocking uses a set number of shield uses, also a button.

It takes some time to adjust to this sort of gameplay, and I only got good at it on both the iPad and iPod Touch after two full bloodlines. By that time, I’d already leveled up greatly and thus defeated the final boss with relative ease, though players can continue on if they so choose. As mentioned above, collecting everything takes a long time. A great game mechanic worth mentioning is cutscene money collection. The cutscenes become boring and repetitive after the 2nd time watching, but sacks of money are hidden throughout the game, many of which can only be found during cutscenes. This makes watching them infinitely more enjoyable.

Experience earned after battles is split five ways, for each item in use based on item class (weapon, helmet, shield, armor, ring). Earning full experience on an item gives users one skill point to devote to health, attack, shield or magic strength, while leveling up gives two points. The only misstep in this experience process is once an item is mastered, the experience earned is thrown out for that item. That means each time players use a mastered item, at least 1/5th of their experience doesn’t get added to the character whatsoever. Especially later in the game, I lost out on experience earned because I didn’t have the money to afford newer items to level up.

Currently, Infinity Blade is a single-player only game. It runs very smoothly, in both iOS 3.2 and 4.0+, though on several occasions I had to exit the app because of a glitch, or it just shut down entirely. My iPad did get surprisingly warm, even through the Apple iPad case, after an hour and a half of continuous play. Thankfully, the game saves after everything, so I never lost my data. More content is planned, with the promise of more armaments, enemies, another section of the castle and multiplayer.

The best part is that it’s only $6.99. With about 30 minutes of playtime through the entire castle once (going the long way through), and the average complete time in 4-5 runs, that’s a pretty good deal. With a promise for more without needing to put down any extra money, Infinity Blade is a best buy. It’s also horrendously addictive…even after I beat the game twice, I was preposterously inclined to continue playing, and just started my 13th run as of this writing. Gameplay is fast enough to remain fun, there are enough in-game items to collect for at least six hours of play, and it’s as stunning a game as you can find on any mobile device. Eat that, Sony and Nintendo.