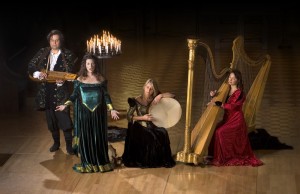 Joaquin Ayala of Winter Harp performs on a menagerie of strange musical instruments from medieval times, and none is more archaic than the monstrous organistrum. Grandfather of the hurdy-gurdy, with the body shape of a guitar, the instrument is played by two musicians, one of whom turns a rosined wheel that rubs or bows the strings from below, while the other inserts and removes keys on the neck to provide melody and simple harmony. Drone strings give this Leviathan its low, earthy, and bagpipe-like sound.

The organistrum has long fascinated Ayala, who plays a contemporary model based on a 12th-century carving on the front of the cathedral in the pilgrimage city of Santiago de Compostela. This year Ayala travelled to Galicia in northwest Spain and got a rare close-up look at the famous work, thanks to a lucky break.

“It’s right at the top of the architrave, with kings from the Old and New Testament holding instruments on either side,” Ayala says over the phone from his New Westminster home. “The organistrum is the instrument they’re tuning to, the only one depicted being played. You wonder why the carver chose that exact moment. It refers to the book of Apocalypse, and is the very first note of the new world being struck after the old world has passed.”

When he reached the cathedral, however, Ayala was dismayed to find it covered in tarpaulins and under restoration. “I was cursing my luck and shaking my head when a young priest walked by. ‘Most people who come here are overjoyed, but you look upset,’ he said. I told him my story and he said to come with him. We went behind the scaffolding, put on hard hats, climbed the stairway, and I got a personal tour and stood almost nose-to-nose with the carving. It was incredible!”

When Winter Harp performs its annual concert of carols and early music tonight (December 16) at the Capilano Performing Arts Theatre and Saturday (December 18) at St. Andrew’s–Wesley Church, Ayala will turn the organistrum’s wheel on three songs, the traditional “In Those Twelve Days”, “Chanter’s Song” written by harpist Lori Pappajohn, and Cantiga 166 “Como poden per sas culpas” by Alfonso X, king of Castile and Leon. The original music of the cantiga would have used the instrument, and been sung by pilgrims on their way to Santiago.

In addition to Ayala and Pappajohn, the Winter Harp ensemble comprises harpists Janelle Nadeau and Scott Hughes, percussionist Lauri Lyster, singer Carolyn Márkos, narrator Ron Halder, and flutist Jeff Pelletier. “He plays the regular model and the alto flute with its soft, haunting sound that so elegantly evokes moonlight and snow,” says Ayala. “Also the wooden piccolo, which sounds like a medieval fife—so we’ve featured it in some medieval tunes where it dances and sings with the nyckelharpa [keyed fiddle], drum, and tambourine.”

Winter Harp pays close attention to lighting and décor for performances, and when not presenting in a sacred space, the musicians bring along what Ayala calls “our church-in-a-box”. “It’s a medieval-abbey backdrop with stained-glass windows and trompe l’oeil effect so you’d swear it’s real. We want our shows to create a very special ambiance, and invite people to come along in period costume too. Why not go the extra mile and dress the part?”