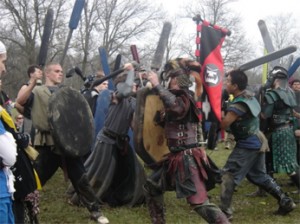 While the dust settles after one of Southwestern College’s most controversial political battles, about 20 students are preparing themselves for a battle of a different kind.

SWC’s newest student organization, the Belegarth Medieval Fighting Club, has staked the college as its realm, and student warriors have spent the last month and a half carving, or as they say “smithing” foam swords, war hammers, flails and other primitive foam bludgeons.

The group is part of a worldwide organization called the Belegarth Medieval Combat Society which, according to its website, Belegarth.com, has a mission to simulate the battles of the medieval and Dark Ages.

“Participants may focus on history,” according to the organization’s website. “But (they) are also free to include elements of fantasy such as those from J.R.R. Tolkien’s ‘Lord of the Rings.’ ”

But the organization is not only about fighting, said club president “Aizen” Santeliz, who would only go by his Belegarth name. There are skills to be learned, he said, such as sewing and leather and foam smithing. The club also delves into the study of the dark ages and makes road trips, meeting people from across the country, he said.

The 21-year-old graphic design major has been involved in medieval sports for seven years and wore two sashes on his belt during the club’s Dec. 8 meeting. One had a compass rose sewn into it and represented his last realm, Andor, located in University Heights, where he served as field commander.

“It’s mostly a group of friends that go out and have fun, however once the realm grows to a large enough size and stability, its starts hosting events,” he said.

He later added, “take your virtues with you and even in the face of adversity to still maintain honor and respect.”

The club was ratified in late October and is still in the infant stages of evolving its identity. Some realms, such as one called Uroki, consider themselves orcs (goblin-like creatures featured in middle-earth fantasy books).

“They charge hard,” said Aizen, referring to a meeting he had with the Uroki in a past battle. Other groups take on a more traditional, knighthood character.

The club will soon vote on its name, colors and flag insignia, but all have their medieval names, such as “Ark,” “Sol,” “Dagger” and “Sai.”

Club member Pablo Martinez goes by “Jameel.” He has yet to fight in a Belegarth battle, but said he looked forward to it. He plans to go to the club’s first practice battle in early spring with a one-handed foam sword and a basic shield. Nothing too heavy, he said, like body armor or a two-handed sword, which can bog a fighter down.

Martinez was one of the club members wrapping blue camping foam around PVC pipe at their meeting. He had a friend hit him with a foam sword and said it did not hurt.

People in Belegarth groups around the world make their own weapons using foam and cushion material. They meet to battle, sometimes one on one, sometimes multiple realms versus each other, sometimes groups try to sack or protect a castle.

Aizen said hundreds of people meet in Idaho at a tournament called “Chaos Wars” and that he had journeyed the 16-hour road trip three times.

A marshal enforces the rules and contestants must play the part. If their arm is hit by a two-handed sword, they must continue their fight with that arm behind their back. But if they are hit by a spear, they can let the arm dangle. Death in battle means the contestant has to lie on the ground. Among some of the weapons and armor a contestant can have are padded shields, body armor, maces, flails, javelins, two-handed swords and arrows.

The club was notified they cannot practice or hold a battle on campus. They can be found on Wednesdays at 2:50 p.m. either under the Dennis Callahan Tree near Jimmy Jay’s Coffee Cart or in Room 415.