“Mouse Guard: The Black Axe” explores past of fantasy world 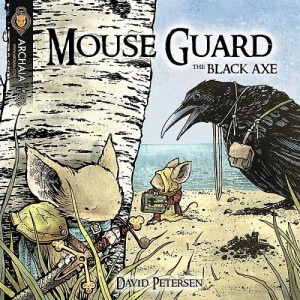 The third volume of the popular “Mouse Guard” series is set for release Wednesday. The bimonthly “Black Axe” will run for six issues. “Mouse Guard” is about medieval soldier mice that stand their ground against a weasel warlord.

“Mouse Guard,” the best-selling title from Archaia, also recently sold out the hardcover edition of “Legends of the Guard” at the distributor level in less than 48 hours. Copies should still be available at retail.

David Petersen answered some questions from The Oklahoman about the latest “Mouse Guard” and plans for the future.

Q: What can people expect from the newest chapter in the “Mouse Guard” saga?

A: The “Black Axe” is a prequel story to “Fall 1152” and “Winter 1152.” It tells the story of a mouse named Celanawe (who we have already met in “Fall” and “Winter”) as a younger mouse and how he is bestowed with both the weapon and the title The Black Axe. So, readers of the series can expect to get some answers about the Axe’s origins, what it means to Celanawe, and what its burden is.

The story will take the characters off the known mouse maps and into uncharted territory, where they will meet a ferret king. Because this a prequel, it allows me to show the backstories of some characters who have since died in “Fall” and “Winter.”

Q: Has your approach to the characters or storyline changed as “Mouse Guard” has become more and more successful?

A: I’m always trying to improve my storytelling. I want to develop the characters with every story and not just use them as mannequins that are carted through an adventure like people on an amusement-park ride. The more of these that I write and develop, the tighter my background work has to be. I need to make sure everything lines up in the end, while still making their meeting point to seem unplottable and interesting to readers.

Q: How do you feel about the quick sellout of the “Legends of the Guard” anthology? Any plans for future anthologies?

A: I was thrilled about the sellout! A lot of really talented people did some amazing work for this book. Anthologies are a hard type of comic to be successful at these days I think, so I was really proud that the audience took a chance on “Legends” and seem to have enjoyed it.

We have already started planning work on a second “Legends of the Guard” anthology with an all-new group of contributors. This time around, people like Bill Willingham, Jim McCann and Janet Lee, Eric Canete, Nick Tapalansky and Alex Eckman-Lawn, Kenneth Rocafort and Stan Sakai will be doing stories — and that’s only half of the list!

Q: Any movement on a potential “Mouse Guard” film?

A: Unfortunately, nothing I can really talk about. Things are moving. I just had a phone call recently with the attached producer and a studio we are negotiating with about a possible director. I really am looking forward to being able to say more about it in the future.

Philippa Of Hainault: Mother Of The English Nation by Kathryn Warner