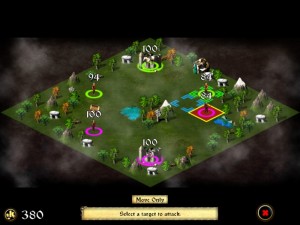 For those of you looking for an interesting turn based strategy game to play on your awesome, brand-new, gaming computer or laptop, and want gorgeous, jaw dropping graphics, then, sadly, this game is definitely not for you. I’m not saying it’s a bad game, but, one of Medieval Battlefields’ biggest flaws is its lack of presentation. The game, from the start, looks disappointing, but, it’s quite the opposite, Medieval Battlefields’ charm comes not from its looks, but from what’s on the inside.

Unfortunately, Medieval Battlefields seems as if it’s striving towards becoming the king of bad impressions. Its first two stages were God-awful and unentertaining. Thankfully, good things comes to those who wait, and Medieval Battlefields prove this. From the third level onwards, it becomes a blast to play, with an A.I that is challenging enough to make you think, but lenient enough to not destroy you. It’s this A.I that makes Medieval Battlefields fun. You’ll be stuck on one stage for almost an hour, and almost never face frustration because the game practically shows you what you have to do to win, with a little thinking of course, but leaves how you accomplish that goal up to you. You’ll end up having a hard time executing your plan, but when you finally win, you’ll realize that it wasn’t frustration you felt, but joy at finally besting the computer.

Medieval Battlefields Screen 4Arguably, the best part of Medieval Battlefields has got to be the soundtrack. For a game with such a low purchase point (and possibly budget), the music is some of the best game music I’ve ever heard, granted it’s only 5 or so songs, the songs are so good I actually found myself ripping a song or two from the installation folder to listen to personally. The game is designed to be played competitively between the PC, Mac, and iOS devices, so PCs and Macs can finally square off and settle their differences in the battlefield.

For $5, Medieval Battlefields is a good buy, especially if your main gaming platform is an iPod/Pad, but for PC and Mac users, there are better strategy games out there to play, but you’ll be hard pressed to find one with music this good.