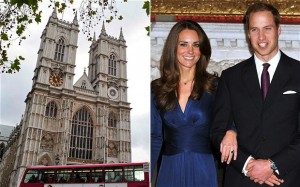 No fewer than 38 kings and queens have been crowned there in an unbroken run since it was built by Edward the Confessor on the site of a former monastery in the 11th century.

He was buried at the Abbey in 1066 and on Christmas Day that year, William the Conqueror became the first monarch to be crowned under its roof.

The Abbey, formally known as the Collegiate Church of St Peter, Westminster, is a “royal peculiar,” which means it belongs directly to the sovereign.

Rebuilt in 1245 by Henry III, it was modelled on the imposing gothic cathedrals of Europe.

Royal Aides said Prince William and Kate Middleton were moved to choose the venue because of its “staggering beauty, its 1,000 years of royal history and its relative intimacy despite its size”.

It is the final resting place of 17 kings and queens and has become known for its burials as much as its weddings.

When Prince William watches his bride walk down the aisle, painful memories of his mother’s funeral will be at the forefront of many minds.

Images of the young Prince, and his brother Prince Harry, walking behind Diana, Princess of Wales’s coffin in 1997 are etched in the public conscience.

Among those who have said their vows at the historic alter are Prince William’s grandmother and great grandmother.

The Queen, then Princess Elizabeth, married Lieutenant Philip Mountbatten, later the Duke of Edinburgh, on November 20 1947.

Princess Margaret, the Princess Royal and the Duke of York all married here, although all three later divorced.

At the west end of the Abbey’s nave lies the grave of the Unknown Warrior, a powerful symbol of war, whose body was brought from France to be buried on November 11, 1920.

Others buried or commemorated there include Geoffrey Chaucer, Jane Austen, Sir Isaac Newton and Charles Darwin.

During the Second World War, immovable Abbey treasures and medieval tombs were protected by around 60,000 sandbags. The Coronation Chair was sent to Gloucester Cathedral and the Coronation Stone was buried secretly inside.

The Abbey has a capacity of 2,000, although during the Queen’s coronation in 1953, tiers and galleries were installed to seat 8,200 people.

It remains a place of daily worship as well as the venue of choice to mark national services and celebrations.

The Dean of Westminster, the Very Reverend Dr John Hall, welcomed Prince William and Miss Middleton’s decision to hold their wedding at the Abbey.

He said: “We are very pleased they have chosen Westminster Abbey for their marriage and look forward to the detailed planning for what will be a great and happy occasion for the couple themselves, for their families and friends, for the country and Commonwealth and for well-wishers across the globe.”