Book: The Mysterium by Paul Doherty 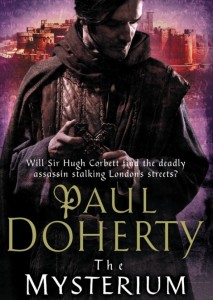 A hooded assassin hums a tune as he lashes his victim to a rotting corpse and hurls him to his death in the freezing inky blackness of the Thames.

Amidst all the death, avarice, greed and lust of those means streets, there’s only one man with the wit and wile to track down the brutal killer.

Sir Hugh Corbett, Keeper of the Secret Seal and the eyes and ears of King Edward I, must track down the ruthless assassin before the deadly crisis deepens.

Master of the historical mystery, Paul Doherty is back with another atmospheric thriller which brings to life all the shadowy politics of medieval England.

In the last moments of his life on the banks of the river, Ignacio Engleat, clerk to disgraced Chief Justice Walter Evesham, knows with certainty that the man about to kill him is The Mysterium, a professional assassin who was brought to justice 20 years ago by Evesham, but escaped.

His hallmark was to etch the letter ‘M’ into the forehead of his innocent victims – it represented the first letter of ‘Mysterium Rei,’ meaning the Mystery of the Thing.

And lashing a man to a dead body was the ancient punishment for a liar and perjuror who sent others to their death ‘by false accusation and blasphemous oaths’.

Within hours of Engleat’s death, Evesham, who was recently accused of bribery and corruption and has been seeking sanctuary amongst the monks at the Abbey of Syon, is found with his throat cut.

The king is disturbed at the implications of the two murders and summons Corbett to investigate whether the Mysterium really has returned or if there is another killer out there imitating his cruel methods.

As Corbett and his trusty sidekick, Ranulf, trace the old sins that hold the key to discovering the murderer’s identity, they know they are facing their most cunning foe yet.

The Mysterium, based on true events during the tumultuous reign of Edward I, has all the suspense and fine detail that we have come to expect from Doherty’s magical medieval novels.

And, be warned, there’s a sting in the tail that will keep Corbett’s followers guessing…