Parts of guns found at Towton War of Roses site 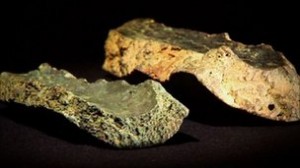 Parts of handheld guns have been found at a North Yorkshire battlefield which saw one of the bloodiest conflicts of the War of the Roses.

A metal detectorist unearthed the fragments of the guns, thought to date back to the 15th Century, at the site in Towton, near Tadcaster.

The find contradicts the idea that guns were only used in that period of history to attack castles.

Experts say it sheds light on the use of guns by troops in medieval battles.

Tim Sutherland, an archaeologist visiting the University of York, said the unearthing of the parts of gun barrels was “incredibly important” – but possibly unlucky for the soldier who had been holding the weapon in the conflict in 1461.

The manufacturing of firearms in that period of time was notoriously unreliable, Mr Sutherland said.

He revealed the reason the guns were probably not found intact was that it was not uncommon for the weapon to explode in the user’s hands because of metal casting faults.

Experts at the ISIS Research Centre in Oxfordshire, which uses neutron analysis to examine samples in minute detail, said the finds were “unique in Britain”.

Mr Sutherland said: “In terms of its rarity, we don’t know of any other battlefield where one of these has turned up.

“In terms of the Towton battlefield, it’s very important because we’re looking at the cusp of the use of archery and the introduction of handguns.

“When we analyse the internal coating, that has the constituent parts of gunpowder.

He added: “We have fragments of handguns that exploded during the Battle of Towton – how rare can you get? It’s unbelievable.”

The Battle of Towton saw up to 28,000 soldiers killed on a single day and has been named as one of the bloodiest battles to ever take place on English soil.

Metal detector user Simon Richardson, who was trawling the site for objects said he was not sure what he had found on the battlefield.

He said: “I found two pieces on two separate occasions.

“I had an idea of what they were, but it’s pretty rare.

“I had previously found a lead ball, so I knew guns had been used.”

She said: “We have looked at the crystal structure of the objects

“They are almost certainly from two different guns.”

But the effectiveness of early battlefield firearms was not a refined art.

“The weapons did more damage and scared horses than it did to the opposition,” Mr Sutherland said.