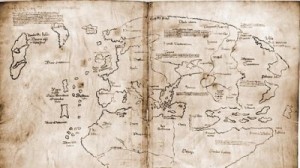 When Christopher Columbus returned from his first voyage to the Americas, he shanghaied ten to twenty-five of the native peoples he encountered on the Caribbean islands he explored. Of these, only 6 were to be presented to the court of Spain’s Catholic monarchs when he returned to the Iberian Peninsula in March 1493. These 6 American natives were presumed to be the first of the New World to set foot in the Old World. Until now.

King Ferndinand of Aragon and Isabella of Castille had joined forces to unite Spain as the first modern nation-state, and by bankrolling Columbus they set about on a process of conquest, exchange, and transformation that still resonates today.

And it is now a Spanish researcher – a modern explorer charting a course in human history – who has uncovered evidence that Americans contributed to the European gene pool approximately 500 years before Columbus’ decisive voyage of discovery.According to new research, scientists have found the genetic past of an Icelandic family that exhibit descent from Americans who were brought to Europe by Vikings who ranged into the northern reaches of what is now Canada and Greenland. Researchers at Spain’s Center for Scientific Research say that a woman from the Americas probably arrived in Iceland 1,000 years ago, leaving behind genes that are reflected in the DNA of about 80 Icelanders today. The link was first detected in Iceland several years ago. The island nation has one of the most thorough gene-mapping programs in the world, and the largest DNA ever attempted was conducted there in 2009.

Suggestions that the genes encountered by the Spanish researchers may have come directly from Asia were ruled out after samples showed they had been in Iceland since the early 18th century, long before Asian genes began appearing among Icelanders. Researchers showed that the genes they studied can be traced to common ancestors in the south of Iceland, near the Vatnajˆkull glacier, in around 1710. ”

As the island was largely isolated from the 10th century onwards, the most probable hypothesis is that these genes correspond to an Amerindian woman who was taken from America by the Vikings some time around the year 1000,” Carles Lalueza-Fox, of the Pompeu Fabra University in Spain, said. Researchers will continue to determine when the Amerindian genes first arrived in Iceland. Said Lalueza-Fox, “So far, we have got back to the early 18th century, but it would be interesting to find the same sequence further back in Icelandic history.” The study will be published in the American Journal of Physical Anthropology.

Norse sagas suggest the Vikings arrived in the Americas centuries before Columbus. Among these would have been the Viking Erik “the Red.” A Viking settlement at L’Anse aux Meadows, in the eastern Canadian region of Newfoundland, is thought to date to the 11th century. Other such settlements are found in Greenland, which Viking navigators reached from Iceland. The Vikings called the North American mainland “Vinland.”

The unknown American woman was probably abducted from the Americas and then brought to Iceland. Having survived her capture and voyage to a distant place with strangers, the woman bore children there. This would explain the resemblance of many native Icelanders to American aboriginal peoples such as the Inuit. That her arrival is not recorded in Norse sagas did not surprise Lalueza-Fox, who averred that “women did not write history.”

The researchers collaborated with deCode Genetics, a company based in Iceland, which has DNA records of practically everyone living on the island. Their studies show that some 80 individuals, representing four distinct family lines, have American genetic origins.

The DNA lineage, named C1e, is mitochondrial – which means that the genes were introduced by a woman. “Given that they have the same sequence and that is of the Ameridindian type, it is logical to believe that these four ancestors, also come from a single common ancestor,” explained Lalueza-Fox. Since Iceland was isolated since the 11th century, “the most reasonable hypothesis is that these genes correspond to an Amerindian woman who was taken from the Americas by the Vikings around the year 1000 AD.”

Since the woman’s arrival a millenium ago, 40 generations of her descendants have flourished. In each generation, there was at least one girl child. “That woman had daughters and that female lineage has not been interrupted until now.” Otherwise, according to Lalueza-Fox, the DNA mitochondrial material would not have been passed down. The Spanish scientist said that he doubted that the woman’s genetic lineage would have been transmitted to the European mainland. No such lineage has been found to date among families in continental Europe, he said.

The Vikings were not only adept warriors and navigators, but also far-ranging slavers. Viking raids on the British Isles and into the Russian heartland brought gold to their coffers not only from pillage, but also from captives they sold in slave markets as far away as Constantinople. Genetic studies show, for example, significant levels of genetic material from the British Isles among modern Icelanders, descendants of Vikings. While the original male inhabitants of Iceland were mostly of Viking origin, the majority of original female inhabitants hailed from the coasts of Scotland and Ireland.

Recreating the 1066 battle march from Stamford Bridge to Hastings

Vikings could navigate, colonize the Arctic during Medieval times