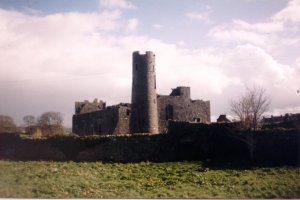 The local authority, through a grant from the Irish Walled Towns Network, has been carrying out the work on a 125m length of the medieval town wall in Kilmallock since earlier this year. Similar works to a 25m section of the town wall were completed under the Kilmallock Town Walls Conservation and Management Plan in 2009.

Kilmallock was once regarded as one of the most strategically important towns in Ireland due to its medieval wall defences, castles, gatehouses and magnificent churches. The town walls, 70% of which remain standing today, have contributed greatly to Kilmallock’s direct involvement in almost every Irish conflict since medieval times. The fortress town was burned during the Desmond Rebellion and the local Dominican Priory was attacked and destroyed during the Irish Confederate Wars.

Commenting on the conservation works Sarah McCutcheon, Executive Archaeologist, Limerick County Council said: “The wall in question is that surrounding the north and east sides of the original parish church, the Collegiate Church of SS Peter and Paul located off Orr Street, Kilmallock. The area was the site of the 7th century monastic foundation dedicated to Mo Cheallog which had relocated from the hill to the north of the town possibly in the 10-11th century. The current works were largely concentrated on the outside face of the town wall.”

Commenting on the significance of conserving the historic wall, Ms. McCutcheon explained: “Kilmallock was a town of considerable importance in the late medieval period, ranking as one of the main urban areas in Ireland at the time. Today it is unique in County Limerick for its range of standing medieval monuments and it is foremost among an exclusive group of Irish towns and cities, which retain their medieval defences. The Town Walls are of national significance, but their potential as a major heritage asset for the town also is significant.”

She noted that the Town Walls were a finite resource requiring conservation and management so as to enhance the public’s appreciation of and access to them.

“I wish to acknowledge the support of the Heritage Council and the Department of the Environment, Heritage and Local Government, via the Irish Walled Towns Network, which has enabled these important works to be undertaken. I also want to thank the staff of the Kilmallock Area Office and the contractors and conservation engineer for their hard work, as well as the two local landowners who allowed us to access their properties to undertake the conservation works”, Ms. McCutcheon concluded.

Initiated by Limerick County Council, under the Irish Walled Towns Network Action Plan 2006-08, the Kilmallock Town Walls Conservation & Management Plan and Kilmallock Walled Town Public Realm Plan strategies are geared towards developing a greater appreciation of and access to the historic Town Walls. The strategies were launched in May 2009 by Dr. Martin Mansergh, T.D., Minister of State with special responsibility for the Office of Public Works (OPW).

Time Team is coming back!