1001 Inventions Uncovers a Thousand Years of Science and Technology 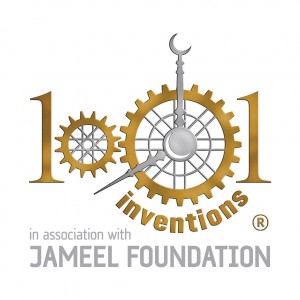 After blockbuster runs in London and Istanbul, 1001 Inventions, an exhibition highlighting the scientific legacy of Muslim civilization in our modern age, will make its United States premiere at the New York Hall of Science (NYSCI) on December 4, 2010. The exhibition reveals the forgotten history of men and women from a variety of faiths and backgrounds whose contributions to the advancement of scholarship and technology during the Middle Ages helped pave the way for the European Renaissance. This period of history from the seventh through 17th centuries is commonly — though, often erroneously — referred to as the “Dark Ages.”

The exhibition is introduced by a short film, The Library of Secrets, which stars Oscar winner Sir Ben Kingsley as the Turkish engineer, Al-Jazari. The centerpiece of the exhibition is a 20-foot replica of Al-Jazari’s “elephant clock,” which dates to the 13th century. Other signature elements include a model of a ninth century flying machine and a scale model of a Chinese junk ship built in the 15th century. Divided into seven zones, 1001 Inventions includes more than 60 interactive exhibits that delve into discoveries that shaped the home, school, market, hospital, town, world and universe. Visitors will learn when scientists first discovered how we see, how ancient approaches to health influence modern medicine, why East and West share so much architectural heritage, and the origins of everyday items like coffee, toothbrushes, soap, and much more.

“Science is a universal language that has a unique power to pull people together. This exhibition reveals fascinating bits of history and a shared scientific inheritance,” said Dr. Margaret Honey, President and CEO of NYSCI. “1001 Inventions is about scholarship, inspiration and discovery among men and women from many cultures, making NYSCI an ideal venue for the U.S. debut — a hands-on science and technology center in the most diverse city in the country.”

Professor Salim Al-Hassani, Chairman of 1001 Inventions, said, “The New York Hall of Science is the first U.S. venue to host this global exhibition. We’re privileged to be working with such an accomplished and respected educational institution. The 1001 Inventions exhibition has had phenomenal success in London and Istanbul, with audiences of more than 400,000 people visiting the exhibition in each city. We look forward with great anticipation to the U.S. segment of our global tour.”

During the Middle Ages, Muslim civilization stretched from southern Spain, across the Middle East, as far as China. 1001 Inventions highlights how science has always been a truly global endeavour, by introducing visitors to European, African, Jewish, Arab, Persian, Indian, Chinese and Turkish pioneers who furthered scientific and technological understanding of our world during this thousand-year time frame. Their work is a legacy that has influenced future generations, right up to today. Among them are:

The academics behind the 1001 Inventions initiative include an international network of historians, scientists, engineers and social scientists from the United States, Europe, the Middle East and Asia.

Following its run at NYSCI, which ends in April 2011, 1001 Inventions will move to the California Science Center in Los Angeles and then to the National Geographic Museum in Washington, D.C. in 2012.

“The 1001 Inventions exhibition’s international tour is sponsored by ALJ Community Initiatives (ALJCI), which is a philanthropic organization renowned for supporting poverty-alleviation programs, artistic and educational projects, and technology innovation grants, including a long history of scholarships for MIT students at MIT. Fady Jameel of ALJCI commented, “We have a long history of supporting educational and artistic endeavors in the U.S. and Europe. Through our sponsorship of 1001 Inventions we aim to provide the role models that will inspire generations of young people, of many diverse backgrounds, to explore the possibility of becoming science and technology entrepreneurs.”

Media previews will be scheduled for the week of November 29. To arrange a tour of the exhibit or schedule an interview with Dr. Honey or Professor Al-Hassani, contact:

About 1001 Inventions
1001 Inventions is a global educational initiative that promotes awareness of scientific and cultural achievements from the ‘Golden Age’ of Muslim civilization and how those contributions helped build the foundations of our modern world.

The purpose of the 1001 Inventions initiative is to engage with the public through diverse educational media in order to highlight the shared cultural and technological inheritance of humanity. The 1001 Inventions global touring exhibition and educational products that accompany it all highlight the scientific and technological achievements made by men and women, of different faiths and cultures, who lived in or are connected with the Muslim civilization.

Originally funded by the British government and launched in the United Kingdom in 2006, 1001 Inventions was created by the Foundation for Science, Technology and Civilisation (FSTC). FSTC is a British based non-profit, international network of the world’s leading academics with expertise in the history of science and technology. Both 1001 Inventions and FSTC are non-religious, apolitical organizations and have received support from various arms of the British government, the Wellcome Trust, the British Science Association and ALJ Community Initiatives, which is the global sponsor of the touring exhibition.

About New York Hall of Science
NYSCI is New York’s center for hands-on fun and learning with more than 450 exhibits, science demonstrations, and programs for families, students and teachers. NYSCI conveys the excitement and understanding of science and technology by galvanizing curiosity and offering creative, participatory ways to learn.

Founded at the 1964-65 World’s Fair, NYSCI has developed into a leading content provider and presenter of exhibitions and programs that demystify our world and encourage curiosity, creativity, critical thinking and discovery.

ALJCI is the Corporate Social Responsibility arm of the ALJ Group, which is a Toyota automobiles distributor in 13 different countries. ALJCI plans and operates numerous global programs, such as poverty-alleviation initiatives, artistic and educational projects and technology innovation grants, including a long history of scholarships for students at Massachusetts Institute of Technology.