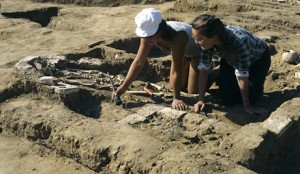 2010 saw Russian archaeologists discovering an array of amazing artifacts. In particular, the remains of an ancient Christian church were discovered in the area adjacent to the construction site of Olympic facilities in the Russian resort of Sochi earlier this year. The church dates back to the 10th century, which archeologists argue indicates that the area was densely populated at the time.

Vladimir Sedov is a Moscow-based senior fellow from the Institute of Archaeology with the Russian Academy of Sciences.

We have always believed that the area adjacent to the territory of modern-day Sochi was unpopulated, Sedov says, citing the just-unearthed remains of the church, which he adds proves the opposite. Now, he goes on to say, we know that the land of Zikhiya was in place in the area, and that the Byzantine Empire had a significant impact on Zikhiya’s culture. Nowadays, the territory includes the Russian North Caucasus republic of Alania plus Georgia’s breakaway province of Abkhazia.

That Yaroslavl was founded in the 11th century was something that had yet to be confirmed, Engovatova says. Not now. Our expedition discovered a spate of occupation layers in central Yaroslavl, which indicates that the city really showed signs of thriving back then, she goes on to say.

Also being unearthed was three rare personal stamps, not least the one owned by Prince Vsevolod I of Yarsolavl, believed to be killed in action in 1238.

Additionally, this year saw Russian archaeologists discovering the remains of a monastery in Jericho, the first such excavations in Palestine after 1917. Leonid Belyayev, head of the Russian expedition heaped praise on his colleagues’ efforts.

A wide array of rare artifacts was unearthed in the area, Belyayev explains, specifically singling out a mosaic floor, which he says consists of at least 150,000 colored stones and dates back to the beginning of the 7th century.

It is safe to assume, therefore, that the outgoing year proved to be a success for Russian archaeologists, whose excavations contributed greatly to a better understanding of Russian history.

Source: The Voice of Russia