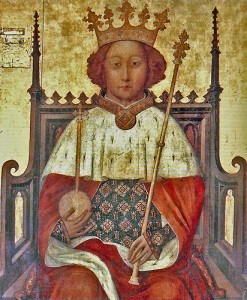 Relics from the tomb of the medieval English King Richard II have been found by an archivist researching the papers of the National Portrait Gallery’s first director George Scharf, the London gallery said on Tuesday.

Among hundreds of diaries and notebooks left in boxes not opened for years were contents from the coffin of the ill-fated monarch and sketches of his skull and bones.

The contents of a cigarette box dated August 31, 1871 were only identified as relics from a royal tomb when it was possible to cross reference the date on the box with diary entries and sketches made on the same day.

The box contained fragments of wood possibly from the coffin itself and some fabric.

Records from this date show Scharf was present at an opening of the royal graves at Westminster Abbey, and a piece of leather corresponds with his sketch of a glove contained in the coffin.

According to the National Portrait Gallery, a full account of the event was recorded by the Very Reverend Arthur Stanley, Dean of Westminster. His account was published in 1879.

Scharf, who also witnessed the opening of the graves of Richard II, Edward VI, Henry VII, James I and Elizabeth of York, made careful sketches of Richard II’s skull and bones, including detailed measurements.

“It was a very exciting discovery and one that reveals the hidden potential of Scharf’s papers,” said Krzysztof Adamiec, National Portrait Gallery assistant archivist who was working on the Scharf papers.

The gallery said that King Richard II’s tomb was opened in 1871 for cleaning, and that so many individuals were present at the event probably because they wanted to determine whether the king was killed by the blow of an axe.

The skull showed no evidence of this, however.

Richard II ruled from 1377 to 1399 when he was succeeded by Henry IV. Many historians believed he died of starvation while in captivity in 1400.