Mystery treasure could be in forgotten medieval code 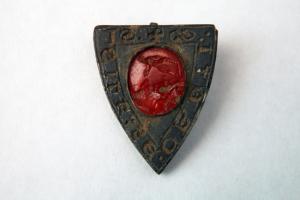 An amateur enthusiast has unearthed a mysterious treasure said to bear inscriptions from a forgotten medieval code.

Ivor Miller’s find is thought to be a medieval silver seal containing a Roman-era jewel and engraved with as-yet undeciphered lettering.

Some have speculated a medieval farm labourer may have found the Roman jewel, a semi-precious stone, and handed it to their noble or lord, who placed it into their correspondence seal.

Although it has not yet been valued, it could be worth about £2,000.

Mr Miller discovered the piece 5in under the surface of a crop field, near Catterick, in North Yorkshire, two weeks ago.

The 43-year-old, from Ludworth, near Durham City, was searching with fellow members of the Northumberland Search Society when his metal detector picked up a strong signal.

He said: “I had found nothing all morning but then I got the signal about 1.30pm. I had a feeling it was something nice.

Mr Miller is planning to hand over the treasure to Durham County Council officials for analysis today.

He said: “Sometimes I can go out for months and find nothing but shotgun cartridges and ringpulls.”

Although he has had an interest in history since an early age, Mr Miller only began using a metal detector about four years ago.

He goes out searching with the society once or twice every weekend, with up to 70 others.

His haul to date includes medieval and Roman coins, but he had never found anything valuable until now.

Norway couple find Viking grave under floor of their house

Norfolk discovery of 1,100-year-old brooch ‘will remain a mystery’