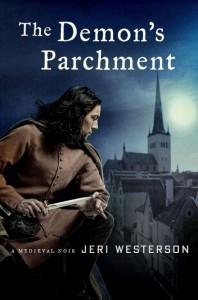 Even more important than an engaging storyline, what every great mystery has possessed is a compelling character at its heart —- and this is obviously even more true for a continuing series.

On this score, Jeri Westerson has succeeded perhaps beyond her own expectations. Crispin Guest is certainly the most unusual “detective” in the current field of mystery protagonists, and in Westerson’s hands one of the most fully developed and intriguing as well.

Those who’ve read the earlier Guest novels, last year’s “Serpent in the Thorns” and 2008’s “Veils of Lies,” know Guest’s back story: A former knight of the court of Edward III, he misread the political winds and joined a rebellion in support of John of Gaunt as regent for the boy king Richard II; when the rebellion failed, he was exiled from court, stripped of his lands and title, and reduced to earning a living on the streets of London as The Tracker, a man who can find lost items or people.

As with her two earlier entries (and the ongoing “diary” of Guest at crispinguest.com), Westerson drops the reader straight into 1830s London: The smells, the sounds, even the atmosphere of the place come alive. It’s a time when even minor wounds can prove fatal, when sundown spells the end of the day, when food is hard to come by and hunger a familiar companion.

In this latest entry, there is a Jew in London —- a French physician brought to court by Richard II to attend to his bride, despite an edict banning all Jews from Britain. When the physician ends up in Guest’s tiny apartment in a poor part of London, seeking his services to find a missing manuscript that may have supernatural powers, Guest must set aside his own prejudices. When a series of child murders comes to light, and it turns out the young boys have been sexually abused before being killed, Guest wonders if the lost Jewish document hasn’t been used to create a golem.

More so than in the previous novels, Westerson engages in a bit of moralizing here —- using the story to make the case for gay rights and religious tolerance. If Guest’s pontifications and contemplations feel a bit out of place in the Middle Ages, those passages also come toward the end of the novel and do not last terribly long.

Readers are more likely to be disturbed by some of the graphic descriptions of the victim’s corpses. To be honest, though, Westerson’s two previous Guest novels also had overly graphic descriptions at a couple of points in each book, whether of a sexual encounter or violence. It seems —- along with the religious artifacts possessed of divine (or possibly satanic) powers at the heart of each mystery —- one of her signatures, although their jarring nature doesn’t seem to advance either the storyline or the reading experience.

And the fact is that Westerson’s wonderfully flowing narrative prose is so solid, so good, so utterly seamless for 99 percent of the time that even the occasional jarring bits can’t really detract from the joy of reading a Crispin Guest novel. The dialogue feels natural, the characters worth caring about, the settings all too real in their dank danger.

“The Demon’s Parchment” is another superb mystery; those who discover Guest for the first time will be compelled to explore back through the original books, while longtime fans will already be looking forward to Westerson’s next novel, living off the bits and pieces she gives us on crispinguest.com in the meantime.