One of earliest books on King Arthur up for sale 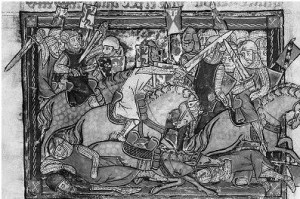 A unique 14th-century book that combines all the tales of King Arthur’s legendary court in one manuscript, illustrated throughout with dazzling hand-painted pictures, is expected to fetch $3.2 million at auction next month.

The illuminated work, known as the Rochefoucauld Grail, written on vellum (animal hide) in Flanders or Artois — known as the low countries — between 1315 and 1323 is one of the world’s earliest surviving accounts of the fabled king’s life.

Timothy Bolton, an expert in Medieval manuscripts who is in charge of the sale at Sotheby’s in London, told Reuters that only snippets of text in poor condition about King Arthur’s court and dated before this time period exist elsewhere.

“This (book) puts King Arthur on the map.

“Somebody (at the time) says I want all of it in one book. And that’s exactly what this is,” he said.

“It’s a conscious effort to bring together everything to do with Arthur, the Holy Grail and its quest, Sir Lancelot, Queen Guinevere and the wizard Merlin, all those associated legends, and weave them together in one big book.”

Bolton said the only other accounts in existence, apart from the oral tradition passed down since the Dark Ages, “tend to be short and restricted to just enough reading for one night.”

The rich three-volume book, thought to have taken 200 cows to produce, is accompanied by more than 100 brightly coloured pictures.

Perhaps the most spectacular shows King Arthur fighting the Saxon army — the fear he engenders is said to have been so great his enemies are shown to be jumping from the page.

“The battle scene is about as close as you will ever get to the actual man himself,” Bolton said of Arthur, who some believe lived in the late fifth or early sixth century, but whose basis in fact has long been disputed by historians.

The book was produced for Guy VII, Baron de Rochefoucauld, head of one of the leading aristocratic families of Medieval France.

It appeared on the market in the early 18th century and later passed to 19th-century collector Sir Thomas Phillipps.

It has only changed hands twice since then.

Bolton said the Arthurian legends were enormously popular in Medieval Europe and were a model for Christian chivalric life.

“It offered the elite so many episodes for how to deal with love, lust, treachery and deceit, friendship and honour,” he said.

It will be offered at Sotheby’s sale of western manuscripts and miniatures on Dec. 7.