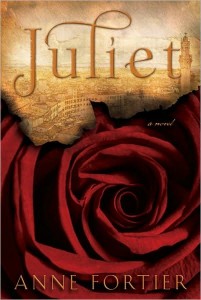 Writer Anne Fortier grew up in Denmark and dreamed of Italy. This wasn’t the stuff of far-fetched fantasy; her mother had once worked in Verona and took her daughter there on regular visits. Fortier took a few minutes while in Denver to talk about Shakespeare, Italy and how her novel “Juliet” came to be.

The novel is based in large part on the Shake- spearean tragedy “Romeo and Juliet.” Fortier said that when she was growing up, the story was real to her. She and her mother would “go back to Verona all the time and visit her friends. And we’d visit Juliet’s balcony and Juliet’s grave. I believed it was true when I was growing up; it was a little bit like Santa Claus. Mom never told me that it wasn’t true, that it was just fiction.”

Reading the play in high school came as an unpleasant surprise. She didn’t recognize Shake- speare’s Juliet. She remembered the statue of Juliet in Verona, “right beneath the balcony, and she’s this beautiful, mature woman. So then you meet Shakespeare’s Juliet, who is maybe 13 or 14; she just lets Romeo manipulate her. I know that I have these modern sensibilities; you can’t be anachronistic like that. But it annoys me greatly, it grates against my modern sensibilities when I read how easily Juliet is manipulated by Romeo.”

It’s a perceived wrong that Fortier has certainly corrected in her novel, which blends historic texts with a tale set in the present. And she moves Juliet’s tale from Shakespeare’s setting, Verona, to Siena.

Fortier said that the tragedy’s origin in Siena is a well-kept secret, as is the fact that the parents weren’t at war. She begins her thread in 1340, in Siena. Over time, she said, there were “a succession of Italian authors who rewrite the story, and rewrite the story, all set in Verona. And then Shakespeare gets ahold of it and he keeps it in Verona. He just runs it through his beautiful brain and writes this fantastically poetic version of it.”

Her mother brought the origins of the tragedy to Fortier’s attention. She said, “Mom saw the information in a book while we were in Siena and said, ‘Did you realize that the first version was set right here?'” Fortier then located a professor in Australia, who set her on the trail of a different version of the story. This was not a feud between the Capulets and the Montagues, but between the Tolomei and Salimbeni families. Central to the tale is the Palio of Siena tradition, a horse race in which each of the city’s contrada, or wards, compete for a banner. The prize is more than a piece of cloth; it is the personification of honor.

Siena remains a place of intrigue. Fortier said, “The way that they are at the modern Palio, they have enemies and allies, reminiscent of these family feuds back in the Middle Ages. And the interesting thing is, if you look at history, always there have been feuds. But I think that the Salimbeni and Tolomei feud ranks among the fiercest feuds in the medieval world. There’s no question about that. When you think about it, it’s obvious why the original author set that first Romeo and Juliet in Siena. This is the place where there is family intrigue.”

Some hostilities transcend history. Fortier said, “Friends will tell me how they’ve gone into a neighboring contrada and have been beaten up. People don’t die, but there’s a lot of bullying and teasing.” People know, she said, not to “go into each other’s contradas if there is a tense situation; they just avoid each other.”

The plague killed many people and settled the Salimbeni and Tolomei feud. But Fortier said that in the late 1330s, the feud was viciously alive. “In 1337, there was a big massacre. In 1339, that’s where they are attempting a peace, this is when I am writing. The plague comes in 1347-48, the black year in Europe. After that, the world is different. That is one of the things I wanted to capture in the book. That is why I decided after ending the old narrative in 1340, to write of later events. I thought people should get the feel of how the world had changed.”

The past, she said, was buried.

But not entirely, it would seem, at least to the modern characters in “Juliet.” Julie Jacobs, 25, travels to Siena to trace her mother’s history, to find that she and her twin sister, Janice, are Tolomeis. The pairing of opposites is one of the things that makes “Juliet” clip along, with Janice the at-times overbearing and over-the-top extrovert, to Julie’s insecure introvert.

Fortier said the sisters’ relationship is rooted in several of her experiences. She doesn’t have a sister, she said, but, “I had a friend growing up who was very much like Janice, and that made me more like Julie . . . Also, once you have established that you are going to have a set of twins, you have the experience of all your friends who tell you about their sibling problems and then suddenly you can create a character.”

She also said that the sisters fit well into the novel’s theme of twinned things, mirrored images and second chances.

Fortier is working on a new novel, but she was loathe to offer much information about it. She did say that the reader could look forward to a next work that would be for women — but that it would hold “no more meek women.”