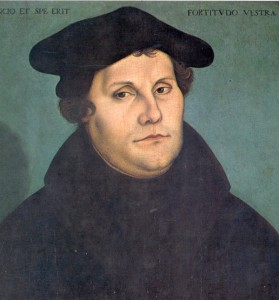 Puppeteers, a juggler, and a minister acting as Martin Luther and dressed like a monk will appear on Saturday when the Historical Society of North German Settlements in Western New York celebrates Martin Luther’s 527th birthday.

The dinner begins at 5:30 p.m. at the Fellowship Hall of St. James Lutheran Church, Bergholz. All the food will be typical of Luther’s time, when potatoes, tomatoes, squash, corn and many types of beans had not been introduced into Germany.

The affair will benefit the House-Barn Fund, for rebuilding an authentic 1844 structure, which back then housed both people and animals. It will stand on the property of Das Haus, the Society’s Heritage Museum in Bergholz.

Many of the dishes to be served will be familiar today, such as roast pork and applesauce, but some will be quite new. The basic difference is that medieval cooks used lots of herbs and spices, but still not as many as Colonel Sanders did.

The meal will be served in “Removes” in each of which a variety of dishes is offered, separated by “Interludes” of entertainment.

Old-fashioned bread, a dish with chicken, and root vegetables will form the First Remove.

The jongleur in the First Interlude will be Dave Fultz, of Tonawanda. He has juggled with the Buffalo Symphony Orchestra and has his own entertainment business.

To cool the palate, an assortment of chilled foods will be offered for the Second Remove.

Puppets will act out one of the Grimm Brothers’ fairy tales as the entertainment during the Second Interlude. Behind the scenes will be Meada Taylor, founder of Kuumba-Nia Productions, and her assistant Rochelle Gleen Smith, both of Lockport.

The Third Remove will be familiar dishes, cooked the medieval way: roast pork, applesauce, wedding cabbage (Schmoakohl), and a dish made from dried lentils, a staple of North German peasants.

The Rev. Dr. Chris Wicher. President of the Eastern District, LC-MS, will appear as Dr. Martin Luther in the Third Interlude. He has a doctorate in historical theology, and has portrayed Luther before. Dr. Wicher has served as pastor of St. Luke Lutheran Church in Cheektowaga and Faith Lutheran Church in Newfane.

A “Sublety,” a sweet surprise prepared by the head cook to show off his abilities, will be the final touch.