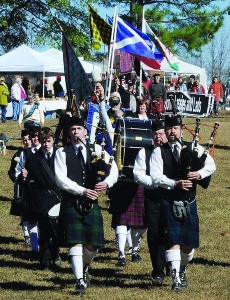 The Celtic Society of West Tennessee hosted its 5th annual Celtic Fest on Saturday at the Casey Jones Amphitheater.

Attendees traveled from Kentucky, North Carolina, Mississippi and Alabama to attend the celebration and fundraiser that took a full year to plan, said Aleeta Smith, vice president of the Celtic Society of West Tennessee.

A portion of the event’s $6 admission will be donated to Habitat for Humanity.

Attendees could either pay a $6 entry fee or pay $5 along with a donated can of food. The can or additional dollar will go to the Regional Inter-Faith Association, Smith said.

The organizing group would use remaining funds to sponsor next year’s festival, which according to a founding member of the Celtic Society of West Tennessee is grounded in history and education.

“We love it because America was settled by people all over the world and the seven Celtic nations were instrumental in a lot of things that have happened in the United States,” Wayne Rher said. “They came over here and assimilated. They did not migrate. They came to be Americans, but they’d never forget their heritage.”

Some of Rher’s ancestors were Scottish. Like many of the event’s participants, he wore a forest green, red and white plaid kilt.

It represented the three states of being, body, mind and spirit, according to Deb Mulligan, owner of Mulligan Pottery.

Part of Carpenter’s family was from southern Scotland, his mother representing the Kerr clan.

“I’m 4, and I’m going to be 5,” Blake said incorrectly. His grandfather corrected him after describing the guitar and set of bagpipes the musicians were playing.

Another family sat off to the side on a red and green flowered picnic blanket. Abigail Hobbs said she was there supporting her husband Nathan Hobbs who played the Irish drum with Kula band.

Her two children, Jaden and Tanaya dropped a bag of Orville natural popcorn as they both attempted to eat the fallen kernels.

Diana Duke, president of the Celtic Society of West Tennessee, described the events targeted to different age groups, most representing an aspect of Celtic culture.

Smith, another original founder of the Celtic Society of West Tennessee, said the group has grown to include hundreds of members and that she was expecting this year’s festival to attract thousands of attendees.

“This is a historical event. It’s not a show. We never want it to be a show,” Rher said. “When it turns into that, we’ll have to do something else.”