Rare collection of medieval coins is to be auctioned off 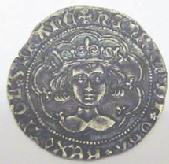 A hoard of medieval coins is due to go under the hammer at Lichfield Auction Centre next month.

The “extremely fine collection” of gold and silver coins was discovered on one of Richard Winterton Auctioneers’ valuation days last week.

“It is the best collection in terms of hammered quality that I have seen in 10 years,” said coin and medal expert Stephen Wrenn.

“We have had one or two hammered pieces, but not to this degree.”

A man from the Lichfield area bought the medieval hammered coins from renowned dealers during the 1980s.

The collection, which has 35 coins in total, includes rarities such as an Edward IV gold Ryal or Rose Noble, two Edward IV gold Angels, and groats of Henry VI and Edward IV.

There are also pennies of Ethelred II, Edward the Confessor, William I and John, two of Henry III and several of Edward I.

The collection is expected to fetch up to £5,000 when offered up in Richard Winterton’s specialist coin, medal and collectors’ sale at Lichfield Auction House, off Wood End Lane, Fradley, on December 14.

The auction is also being televised for the BBC’s Bargain Hunt, with presenter Tim Wonnacott from the Antiques Roadshow.

“We are delighted to welcome Bargain Hunt back once again to Richard Winterton’s,” said associate Adrian Rathbone.

“The team has been here numerous times in the past and we hope it will be a successful show.

“It all helps raise the profile of the local area.”

A series of special valuation days for all types of coins and medals are being held at Lichfield Auction Centre on Tuesdays throughout November, from 11am to 1pm.

To book an appointment, contact the auctioneers on 01543 251081 or, alternatively, email lichfield@richardwinterton.co.uk

Source: this is Lichfield