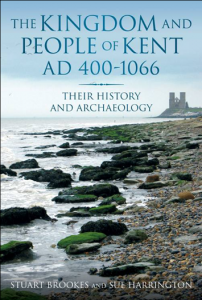 Wealth, power and influence were all words associated with Kent when the county reigned as the world’s first Anglo-Saxon and Christian kingdom. For a brief period more than 1,000 years ago it was recognised as the most important place in England, noted for its power, culture, wealth and international contacts.

However, by the ninth century – long after King Ethelbert of Kent had died – the county had been absorbed by its more powerful neighbours and would never regain such a prominent status.

The rise and fall of the region is detailed in the new book The Kingdom and People of Kent AD 400-1066, described as the first publication to bring historical and archaeological evidence together to describe the story of Kent as a people and as a place.

It was written by Dr Stuart Brookes and Dr Sue Harrington, both researchers at the University College London Institute of Archaeology.

“A variety of different factors allowed Kent to gain the level of power it did,” said Dr Brookes, who completed doctoral research on the archaeology of the county in 2003.

“Its proximity to the continent and close relationship with the Kingdom of Francia (now France) were two main ones, as it meant it had a monopoly of all these different resources and symbols that came across the Channel.

“Kent used these resources – like silver, gold and other Roman symbols of legitimacy – to exert its superiority over other kingdoms.

“However, by the time the Dark Ages came round the kingdom of Kent was already in decline.”

The Kingdom and People of Kent is a chronological account examining such themes as migration, settlement, the making of kingship, the impact of the church, and warfare and defence.

Supported by maps, illustrations and black-and-white photographs of archaeological findings, the book looks at both the everyday experiences of people living throughout the period and the wider world which heavily influenced Kent’s growth.

“It’s a classic case study of state formation and how such kingdoms come about,” said Dr Brookes.

“How do people gain power, how do they exert that power over others and how does that power disintegrate? This book attempts to answer these questions.”

The Kingdom and People of Kent is available now, priced £14.99.