Battle to save Bagots Castle in Baginton 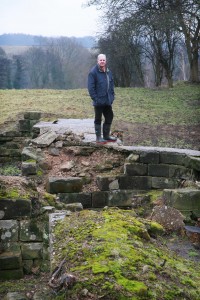 A race against time is underway to save forgotten Bagots Castle in Baginton.

The medieval castle dates back to the 14th century – but hardly anyone knows it’s there.

Villagers want to conserve its ruins – but only have a few months to raise the money needed to preserve it for future generations.

Parish councillor David Hewer has taken on the project as a labour of love and has to raise £26,000 in five months.

If the money is not found in time the castle will lose out on a £104,000 grant from English Heritage.

The father-of-two has already ploughed in £26,000 of his own money to have the site off Church Road cleaned up after it became a target for vandals.

He and a small team of volunteers cleared the site of 30 tonnes of scrap metal, including 8,000 beer cans, after it became a favourite hangout for youths.

Mr Hewer, aged 63, said: “The main thing is to save something that needs saving for future generations.

“We always knew the castle was there and we got annoyed when the vandalism was going on. It was just wilful vandalism of a listed building. We’ve spent that money cleaning and restoring the site.

“We’re lifelong members of English Heritage and the vision is for people to be able to come visit and look around the site. Kenilworth Castle down the road has been given £2 million but Bagots Castle has just been left.”

“Eight years ago you couldn’t see any of this – it was all over grown. The longer it goes on the more deterioration we get and the less chance there is of uncovering more of the castle. It’s a very soft sandstone and it sustains a lot of damage.”

The land – and Bagots Castle itself – is owned by Coventry Golf Club but Mr Hewer has a 28-year lease on the land to act as its “custodian”.

He has given tours of the castle site to enthusiasts from around the globe.

“We’ve had people over from Poland and Spain and they had come because they saw the website.

Not much is known about the fate of the four-storey castle as by the 16th century it was in ruins. Excavations between 1933-48 exposed the foundations of the keep building with chimney, a stair turret and a wardrobe room.

In the last 50 years the summer house – added to the castle in the 17th century – was vandalised, filled with rubbish and pushed down an embankment by youths.

Mr Hewer has ensured the site is currently open to the public in small groups and by special appointment. Visit Bagots Castle to donate towards the restoration of Bagots Castle.