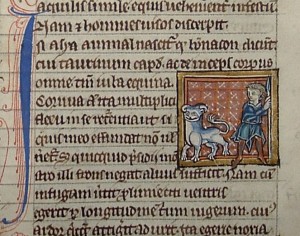 The culmination of a pioneering international project which has uncovered new insights on Norman England is to be celebrated on Wednesday 10th November at 3.30pm at the University of Leicester.

A new study of early medieval manuscripts written in the English language has revealed that the Normans, who conquered England in 1066, were not the destructive force of popular belief, sweeping away everything that had gone before.

The project, ‘The Production and Use of English Manuscripts 1060-1220’ was funded by the AHRC (Arts & Humanities Research Council) and provides contextual information and a catalogue of all the surviving books that were written between 1060 and 1220 that contain text written in the English language. This descriptive catalogue is freely available to other scholars in the field.

The new story shows English people living under Norman rule continued to write, read and preach in the English language as they had done under the Anglo-Saxon kings in earlier centuries, in the new social and political climate.

In particular it challenges the long-held view about the English language being driven underground after the Norman Conquest.

“Hundreds of texts are written in English between 1060 and 1220 right across England – laws, sermons, saints’ lives, land charters, medicinal recipes and prayers,” said Dr Orietta Da Rold, Lecturer in Chaucer and Medieval Literature at the University of Leicester, and Co-Director of the project.

“Some manuscripts are probably owned by wealthy people; others are the property of a church broadcasting to ordinary men and women by preaching, and by providing spiritual and medical care and guidance.

“An ordinary person in late twelfth-century Worcestershire, for example, would have been preached to in English at their local parish church, and the instruction they would be given would echo the content and language of that given before the Conquest, but it would have new resonance.”

Men or women trained to write down texts would probably have worked in English, Latin and Anglo-Norman with equal ease. Monks and nuns across England would be used to reading a range of languages, and drawing on traditional English texts to think about new theological ideas.

This multilingualism means that scholars cannot think about people’s identities in simple terms – Anglo-Saxon, or Anglo-Norman, for example. The different languages of England from the late eleventh to the early thirteenth century were not operating in opposition to each other.

Latin and French quickly acquired high status in the worlds of state and church, but English carried on alongside them.

‘The Production and Use of English Manuscripts 1060-1220’ has also begun to show interesting regional variations in the writing of English manuscripts, and also routes of transmission of books and scribes across the country.

Dr Da Rold added: “Overall, what we’ve uncovered is a picture of continuity and change; a world of layers where old and new, English, Latin and French, Anglo-Saxon and Anglo-Norman are interleaved.”

Dr Mary Swan, Director of Studies of the Institute for Medieval Studies at the University of Leeds and Co-Director of the project, commented: “We undertook the project because we knew that there was a wealth of material which had never been looked at together. We had come across lots of examples of manuscripts written in English after the Conquest.”

“What we needed was a full research project to map all the examples in a way which would allow us to look at them together, and to see how they fit geographically and chronologically.”

“We can expect exciting results for years to come from our findings,” said Dr Da Rold. “Because our data is freely available, we hope many researchers will use it to the advantage of the field”.

The launch of the AHRC-funded Project ‘The Production and Use of English Manuscripts, 1060 to 1220’ will take place on Wednesday November 10th at 3.30 in the Fielding Johnson South Wing Basement, The Ogden Lewis Suite, at the University of Leicester. This is an open event and members of the public are warmly invited to attend. Please book a place by sending a request to Orietta Da Rold, tel. 0116 2525 2778, e-mail. odr1@leicester.ac.uk.

The Guest Speaker will be Dr Katie Lowe, the Director of the University of Glasgow Centre for Medieval and Renaissance Studies.

‘The Production and Use of English manuscripts 1060-1220’ was funded by the AHRC (Arts and Humanities Research Council, UK), with support from the School of English, the University of Leicester and the University of Leeds. The project team was supported in its work by an international Advisory Board.