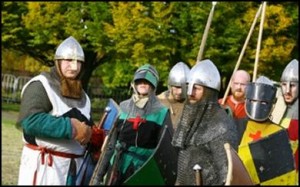 Nottingham Castle was transformed into a medieval village over the weekend for the 21st Robin Hood Pageant.

Minstrels wandered through the grounds, King Richard I was watching over events and, of course, Robin Hood himself was there.

There were demonstrations, a medieval alehouse and a chance for people to turn lead into “gold” at an alchemist’s lab. And crowds were entertained by jousting tournaments and falcon displays on the castle green.

Hundreds of people, both young and old, enjoyed going back in time.

Matt and Emma Harrison, of West Bridgford, were there with their children, Ben, seven, Jared, five, and Zelda, three.

“We’ve been coming to this for about three years now,” said Mrs Harrison. “It is an impressive display and it’s good to see Nottingham doing things to do with Robin Hood.”

Richard Dawson’s children Amy, six, and Joel, four, had a go in the stocks.

“We like to be able to walk around and look at the displays,” said Mr Dawson, 36, of Long Eaton.

“It is good to see that we are celebrating Robin Hood, as well. There’s lots of bad publicity so it is nice to see something good like this happening.”

While people were free to wander round the medieval village, the arena on the green was one of the main focuses of the event. As well as the jousting, Robin Hood and his merry men took on the Sheriff of Nottingham, with a little help from the audience.

Six-year-old Daneil Hibbard was one of many who had a go at archery. He was watched by his dad Neil.

Mr Hibbard, 36, of Long Eaton, said: “It’s good that you get to have a go at things. The kids really seem to enjoy it.”

“This is the first time we’ve been to the pageant, and I’ve had a really good first impression,” said Mrs Blake.

“There is a lot to see and do. All of the costumes really help to bring history to life. It is great that Robin Hood can be celebrated.

“It’s fun for the children, but it’s educational as well, which is good.”

Paul Jones, 45, of Hucknall, was also having a good time.

“I’ve been for about the last five years and it’s always a brilliant event,” he said.

“It doesn’t matter how old you are, it’s always interesting to see history brought to life.”

Clare Thomas’ children Billy, five, and Sam, three, were dressed up for the occasion.

“We haven’t been before but it is well worth the trip,” she said.

“It’s interesting for us but also for the children, especially when they can dress up.

“It’s really impressive how people around here don’t just wear the costumes but they also act out their parts. It really adds to the authenticity.”

Source: this is Nottingham